‘I’d like to offer you a holiday’: Richard E Grant’s childhood letter to Barbra Streisand 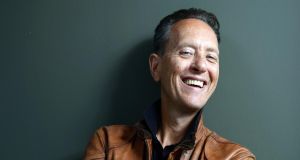 Richard E Grant has shared a letter he wrote to Barbra Streisand when he was 14 years old, in which he invited her to stay with him and his family in Swaziland for two weeks, and promising “not many people will know who you are, so no chance of being mobbed”.

The actor shared the letter on Twitter this morning, after taking a photograph outside her home. “Asked Security for permission, and he replied, ‘It’s a public road, but thanks for asking’,” he Tweeted. “My wife is very understanding!”

The letter was sent by Grant when he was a child living in Swaziland in south-east Africa.

“You don’t know me yet, but I am writing to offer you an idea you might like to consider,” it begins. “My name is Richard and I live in a small African kingdom called Swaziland in south-east Africa. Since seeing Funny Girl, we, my family that is, and I have been very big fans. I have followed your career avidly. We have all your records. I am fourteen years old.

As a lifelong fan of someone you’ll understand what it meant for me to take this snap outside the home of @BarbraStreisand Asked Security for permission & he replied ‘It’s a public road, but thanks for asking’ Wrote her this letter when I was 14. My wife is very understanding! pic.twitter.com/3SohXKpgZT

I cannot begin to properly express what your generous reply has meant to me! THANK YOU. And most especially for NOT calling Security to have me arrested!! ❤️❤️❤️❤️❤️❤️ https://t.co/IqLWDYGqsa

“I read in the paper that you were feeling very tired and pressurized by your fame and failed romance with Mr Ryan O’Neal. I would like to offer you a two week holiday, or longer, at our house, which is very beautiful with a pool and a magnificent view of the Ezulwini Valley.

He continued: “No one will trouble you and I assure you you will not be mobbed in the street as your films only show in our one cinema for three days, so not that many people will know who you are, so no chance of being mobbed. Please consider this respite seriously. You will always be welcome.”

Grant has been nominated for an Oscar for his performance in 2018’s Can You Ever Forgive Me with Melissa McCarthy, but his breakout role was as Withnail in cult-favourite 1987 film Withnail and I. The film ends with Withnail quoting Hamlet’s famed monologue, “What a piece of work is a man”.

It’s fitting, then, that his 14-year-old self ended his letter with a quote from Shakespeare, which he was studying at the time. “[I] hope these lines will reassure you,” he wrote to Streisand. “Theseus – ‘For never anything can be amiss when simpleness and duty tender it’, or Puck – ‘If we shadows have offended, think but this and all is mended. That you have but slumber’d here, while these visions did appear.’”

Streisand herself has since replied, writing, “What a wonderful letter … and look at you now! You’re terrific in your latest movie with Melissa congratulations and love Barbra”

Grant retweeted the reply saying, “I cannot begin to properly express what your generous reply has meant to me! THANK YOU. And most especially for NOT calling Security to have me arrested!! – Guardian

Don’t dip your pen in someone else’s blood: writers and ‘the other’
6

David Chase on ‘The Sopranos,’ Donald Trump and, yes, that ending
7

John Hume: The US connection and the making of a documentary
8

John Boyne: ‘I am not a provocateur. I don’t seek to hurt people’
10