Mowgli: Legend of the Jungle lacks the bare necessities

Review: Andy Serkis’s ambitious, slow-paced movie may be a ‘Jungle Book’ too many 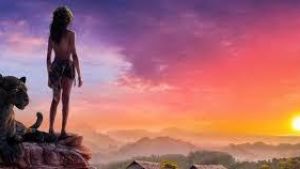 Back in 2012, Alejandro González Iñárritu and Ron Howard were briefly attached before Andy Serkis came onboard as director. Since then the film has been repeatedly bounced around the schedules – to allow more time for SFX and  to move away from Disney’s 2016 hit – and finally bounced onto Netflix.

The core story remains the same: a young human orphan (Rohan Chand) is found in the jungle and raised by a pack of wolves. As Mowgli grows up, he is doted on by his lupine mother (Naomie Harris), and mentored by Baloo the bear (Serkis) and Bagheera the black panther (Christian Bale).

The hyenas are less keen on the boy. Meanwhile, the murderous tiger Shere Khan (Benedict Cumberbatch) skulks about, determined to kill Mowgli and his pack.

The animals have more character and range than their Disney counterparts, details that can, momentarily, leave them stranded in the uncanny valley. For all the chatter about moving the project to avoid comparisons, it’s impossible not to think of previous incarnations and equally impossible not to feel that there are now too many Jungle Books.

There’s more detail and darkness here than in Jon Favreau’s all-ages version, although there are occasional flashes of undercooked SFX. Serkis’s film, commendably, is not for the faint of heart. When Bagheera catches up to Mowgli during an initiation rite the moment has the same ambiguous menace as Ethan Edwards’ rescue operation in The Searchers.

A subsequent fight between the man-cub’s two tutors is a properly violent brawl. The final showdown with Shere Khan is a bloodbath. The addition of a game hunter named Lockwood (Matthew Rhys) adds an interesting colonial dimension.

The slower pacing, too, demands an older audience. An adult-oriented Jungle Book might have been a neat innovation if only the script, credited to Callie Kloves, weren’t so listless. Muddled, pretentious narration from Kaa the python (Cate Blanchett) detracts rather than adds to the storyline.

For all its ambition, one can’t help but yearn for a blast of the Bare Necessities.

Life, death and the secrets that lie between
6