Mindhorn review: good-fun, high-concept Britcom with a bit too much plot 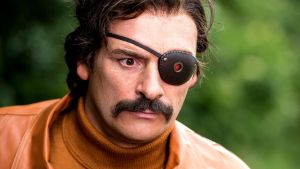 How odd to see a film shot in the Isle of Man that is actually set on that windy island. Long a movie stand-in for any nation with a shoreline, the crown dependency plays itself in a British comedy that, though funny throughout, feels just a little overextended.

Julian Barrett plays Richard Thorncroft, the former star of a 1980s TV show concernng a clairvoyant investigator named Mindhorn. The film is a little unsure as to what sort of series is being parodied. Its setting on an island tax haven – and several digs at John Nettles – suggests we’re looking at Bergerac. But the science fiction premise points in an entirely different direction.

Anyway, though a cult following remains, the series’ early success has not provided Richard with any sort of pension. He is now reduced to low-grade public information films and very bad television. Then an unexpected offer arrives. A maniac calling himself the Kestrel (Russell Tovey) declares he will negotiate only with the mighty Mindhorn. Thorncroft journeys back to his old stomping ground and meets a mess of still-unresolved entanglements.

There are whiffs of Matt Berry’s vain actor Steven Toast to Thorncroft, but what the film really suggests is a better episode of the 1980s series The Comic Strip Presents… As in that feature series, a host of decently famous people pop up to deliver strong cameos. Simon Callow is very grand as a version of himself. Harriet Walter is long-suffering as Thorncroft’s agent.

Indeed, everybody acquits themselves well. Andrea Riseborough slums it enthusiastically as a local cop. Essie Davis, best known from The Babadook, casts eyes to heaven as Thorncroft’s former wife. The script is packed with good lines. (Richard uses “the Benedict Cumberbatch backlash has begun” as a vocal exercise.)

But, like many such high-concept Britcoms, the picture gets clogged up with a plot that is too complicated for its own good. Anybody who cares about the “real killer” will have identified him or her within half an hour.

Very good fun, for all that.

Time of the Magicians: Masterclass on four giants of Germanic thought
6

Fleet Foxes: ‘I’m trying to find silver linings in this madness, a healing space in music’
8

Time of the Magicians: Masterclass on four giants of Germanic thought
Real news has value SUBSCRIBE