Meetings With Ivor review: a tie-dyed in the wool, almost mystical guru

This documentary about Prof Ivor Browne portrays a divisive figure in a playful way, and is alive to his flaws as his far-out ideas

'Meetings with Ivor' aka 'The Wonder Eye,' Alan Gilsenan's new film on groundbreaking psychiatrist Ivor Browne, is screening for the first time on Saturday 14th January at the IFI Cinema. 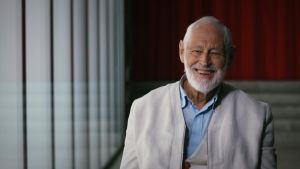 Professor Ivor Browne: presented as a sort of mystical guru

Professor Ivor Browne, now in his late 80s, has managed to remain controversial and divisive throughout his long career. As chief psychiatrist with the Eastern Health Board and professor of psychiatry at UCD, he established a reputation for work that, to quote Alan Gilsenan, director of this profile, “took place outside, and in spite of, orthodox thinking”.

It is, thus, surely appropriate that Gilsenan’s attractive film seems unashamed to provoke further division. Decorated with elaborate montages that illustrate and complement the conversation, Meetings with Ivor presents the subject as a sort of mystical guru: suspended in white light, he looks like nothing so much as Marlon Brando’s Jor-El in Superman.

The film is structured around a series of “meetings” with celebrities that suggest disinterment of Dr Anthony Clare’s highbrow talkshow In the Psychiatrist’s Chair. No mere singer, Mary Coughlan is introduced as “the songstress”. Sebastian Barry is “the wordsmith”. Tommy Tiernan is not “the jokemonger”, but he is here all the same. Towards the close, we learn about Browne’s apparent belief in reincarnation and his slippery notions concerning quantum mechanics.

Those hitherto unfamiliar with Browne’s work could be forgiven for raising eyebrows at his more tie-dyed opinions (this is, after all, a man who claims to have introduced LSD to California). In contrast, Brendan Kelly, professor of psychiatry at Trinity College Dublin, seems a model of sobriety and discipline.

But most of what the subject says makes beautiful, elegant sense. He is wary of excessive drug treatment for mental illness. He speaks powerfully about the limits of therapy. His eloquent passion for jazz – and for Thelonious Monk in particular – reflects an irrepressibly creative temperament.

Far from indulging in hagiography, the film is alive to Browne’s flaws and there is no better woman than Nell McCafferty for pointing such out. Her forceful teasing of the psychiatrist – suggesting he is patronising of women – is characteristic of a lively, playful and, yes, infuriating film. Worth seeking out.