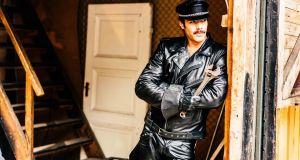 Tom of Finland had more in common with Walt Disney than the American animator would have cared to admit. Both created sharp, well-defined images that came to define a time and culture.

There really was a Tom of Finland. He wasn’t called Tom, but he was from that Nordic country. Touko Valio Laaksonen was an urbane advertising man who operated anti-aircraft guns during the second World War. He may, though his name is obscure, be more conspicuously associated with his home nation than any artist other than Sibelius. In 2014, the Finnish Postal Service issued stamps featuring images from Tom’s work. Dome Karukoski’s Tom of Finland, a well-made biopic, has been a significant hit at the domestic box office.

“It’s changed. When we started working on the film in 2011 he was still obscure,” Karukoski tells me. “Conservatives probably still felt some shame about his existence: ‘What are they thinking about him abroad?’ The stamp was also a bit of a scandal. A lot of the conservatives are against it. But attitudes did change. Now even the Conservatives are saying: ‘Oh, you know I don’t like the art. But he’s Finnish. Go Finland.’ ”

It was his US publishers who combined his monosyllabic pseudonym with the country of his birth to create the durable brand. The unmistakably American iconography is lent exoticism by association with a country then seen (not entirely accurately) as unimaginably liberal.

It was considered a sickness until 1981. Finland actually was behind places like Denmark and Sweden in that

“It wasn’t at all like that,” Karukoski says. “He didn’t use his name because it was illegal until 1971 to be homosexual. Even his art was illegal. You could be prosecuted. It was considered a sickness until 1981. Finland actually was behind places like Denmark and Sweden in that.”

Tom of Finland’s work is now so (for once the word is appropriate) iconic that it’s hard to tell to what extent it represents a type and to what extent it created a type. The leatherman subculture was there – fetishised in Kenneth Anger’s Scorpio Rising and elsewhere – but Laaksonen’s images gave it a clarity and a discipline.

“Well it is the egg and chicken story,” Karukoski says. “You could say it was the biggest influence on the hyper-masculine gay. There were other artists, but his drawings really exploded. They became a marque.”

And he was fighting against negative stereotypes in the straight world. “He took that image from Marlon Brando in The Wild One and created this character called Kake. In English he was called ‘Butch’. That was important. He was on a mission to change perceptions. At that time doctors in Finland would say ‘gay men lack testosterone and have a weak voice’. He was a great influence in fighting against that.”

Laaksonen’s skills as an ad man were essential in helping the art find an audience. “He was a salesman,” Karukoski agrees. He began with a more scattered, diverse series of drawings before honing in on a type that helped spawn a niche industry. The images were eventually published in upmarket editions on high-quality paper with smartly designed covers.

He worked steadily at his well-paid job until 1973. Thereafter, he lived on the drawings

The New York Museum of Modern Art has acquired artwork for its permanent collection. Yet the artist, who died in 1991 of emphysema, never became rich. He worked steadily at his well-paid job until 1973. Thereafter, he lived on the drawings, but nobody would have mistaken this fastidious reserved man for a Jeff Koons.

“No. Not really,” Karukoski says. “I am pretty sure he would have been able to provide for himself by the late 1960s. But he worked a bit longer. He liked the ad agency. He liked being in that bohemian environment. Also, he’d give his work away for free often. Somebody would say: ‘Will you draw my boyfriend?’ And he’d just do it.”

The tension between the American and the European seem to be at the heart of Tom of Finland’s appeal. The drawings emerged partly out of a longing for Californian glamour in a gloomy post-war Finland.

It’s a statement. But it’s also a good-looking shirt. He’d be happy about that

It looks as if Laaksonen has now found a degree of immortality.

“I’d say he’d have a sly grin now about the situation in Finland,” Karukoski says. “You see 15-year-old girls in Tom of Finland T-shirts. It’s a statement. But it’s also a good-looking shirt. He’d be happy about that.”

Aki Kaurismaki (1957- ) The director of such off-beat masterpieces such as The Match Factory Girl and The Man Without a Past is a contender for greatest living Finn.

Linus Torvalds (1969- ) Torvalds is essentially the creator of the Linux operating system kernel. Originally devised for his own PC, it now runs most megacomputers.

Mika Häkkinen (1968- ) The Finns are as disproportionately addicted to motor racing as are the Northern Irish. Häkkinen won two Formula One championships in the late 1990s.