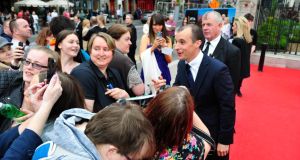 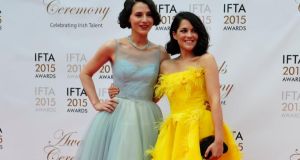 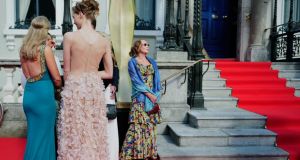 Guests picutred on the red carpet outside The IFTA’s in The Mansion House, Dublin tonight. Photograph: Aidan Crawley 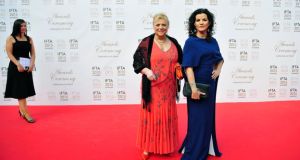 The surprise and cheering recipient for Best Film was Tomm Moore’s animation Song of the Sea, nominated earlier this year for an Oscar for Best Animated Feature.

But the staging of the IFTAs may have counted as an achievement itself. Following last year’s technical difficulties, lengthy running time, background noise pollution and ill-advised selfie opportunities, the future of the annual event to celebrate Irish screen talent looked uncertain.

RTÉ opted not to broadcast this year’s ceremony, the Irish Film Board reduced its funding for the event, and new partner TV3 cautiously chose to broadcast an edited recording.

Scheduled in the same weekend as the closing ceremony of the Cannes Film Festival, the Eurovision final and the ebullient results of the Marriage Equality Referendum, you could be forgiven for thinking that the Iftas were deliberately keeping a low profile.

As they arrived on the red carpet, on a bright evening, most of the assembled seemed happy to be overshadowed. “Yesterday was extraordinary,” said actor Sarah Greene of the referendum results. The Cork-born performer was nominated for her role in the Christina Noble biopic, Noble, as well as in the category of Rising Star. “It’s a highlight that’s hard to top.”

Visiting from London for the weekend, Dublin actor Andrew Scott, felt the same. “It’s been an absolutely amazing weekend. I’m so overwhelmed that I got to be here. I haven’t given much thought to winning or losing. I just feel like everyone’s a winner this weekend.”

Some winners were more equal than others. Greene won in her award category. A new highpoint? “No, yesterday was the highpoint of my weekend,” she maintained. Later she returned with the award for Rising Star. “Can we just say it’s been a great weekend?” she added, diplomatically.

From the moment the show began, presented with a brisk good cheer by Caroline Morahan, the Iftas seemed determined to reform.

Trophies were dispensed and accepted in a flurry. Winning for Supporting Actress in a Drama, Aisling Franciosi spoke graciously and for less than a minute. Stephen Rea, taking the equivalent male prize for An Honourable Woman, was nearly as brief, but earlier he spoke sincerely about the worth of celebrating the Irish industry.

“This puts a gloss of glamour over something that’s really quite tough. I absolutely think it’s a vital moment that we do acknowledge the industry. Our crews are great and they deserve the work.”

The attendance was, if not star-studded, at least gem-encrusted. Best Actor nominees Colin Farrell, Michael Fassbender and Jack Reynor were not in attendance, but the award went to emerging star Moe Dunford for his roundly applauded performance as the schizophrenic protagonist of Patrick’s Day.

The film’s writer and director, Terry McMahon, took the honours for best script. One big winner of the night, by proxy, was Christina Noble who saw three depictions of her life awarded, in performances by Greene and Deirdre O’Kane in Stephen Bradley’s biopic Noble , and in the documentary winner In A House That Ceased to Be.

Jim Sheridan was awarded a Lifetime Achievement Award, presented by the actor Sean Bean, and featuring an eclectic gallery of tribute payers from director Neil Jordan to actor John Hurt to the rapper 50 Cent.

Best Film: Song of the Sea

Actress in a Lead Role in Film: Deirdre O’Kane - Noble

Actor in a Supporting Role in Film: Domhnall Gleeson - Frank

Actress in a Supporting Role in film: Sarah Greene - Noble

George Morrison Feature Documentary: In A House That Ceased to Be - Atlantic Film Alliance

Actor in a Supporting Role in Drama: Stephen Rea - The Honourable Woman

Actress In a Supporting Role in Drama: Aisling Franciosi - The Fall Series 2

Production Design: John Paul Kelly - The Theory of Everything

International Actor: Eddie Redmayne - The Theory of Everything