Green Book: A rearranged ‘Driving Miss Daisy’ up for the Oscars 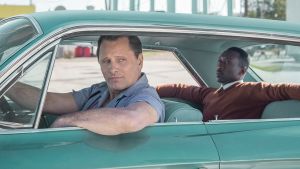 We know Tony will become less racist, and that Don will loosen up

I don’t suppose we need to feel sorry for Green Book. After winning the People’s Choice award at Toronto – a sure-fire pointer to Oscars – it has gone on to achieve a lot more than many subtler films throughout this awards season.

That acclaim has, however, drawn attention to the film’s crudeness. There’s something of a rearranged Driving Miss Daisy about it (posh African-American gets driven by working-class white bloke). Many of the jokes trade in the same territory as Planes, Trains and Automobiles (the posh bloke winces at his rude mechanic’s travel choices).

But, as Noël Coward almost wrote, it is strange how potent cheap music can be. Viggo Mortensen and Mahershala Ali hit all their bold chords with deafening fervour. The sentimental payoff is so irresistible – at Christmas too – one feels obliged to doff one’s snooty hat in its swaggering direction. If it weren’t such an awards player it might be getting a free pass.

Mortensen piles on the pounds and relishes the hand gestures as Tony Lip, a tough Italian-American from the boroughs who hustles for every dollar. The film, set in the United States’s anxious 1960s, suggests it may be taking us somewhere properly dark when, early on, we see him throwing out the drinking glasses used by two African-Americans who have been working on his house.

From then on, however, Tony’s racism is of the softer, uncommitted variety that will surely yield to – oh, I don’t know – spending some time in a car with cultured Mahershala Ali. That fine actor plays the jazz pianist Don Shirley and, in his opening scenes, he allows the character a brave degree of pomposity.

But, just as we know Tony will become less racist, we know that Don will loosen up the stays, and that both will end up setting an example for odd couples everywhere. This happens as Tony drives Don around the segregated south on a concert tour.

Director Peter Farrelly fails to recapture the delicate touch he brought to sensitive sequences such as Woody Harrelson drinking bull semen in Kingpin. It’s a bit broader than that. Mortensen yells “bafangool” from one corner of his mouth while ramming a meatball sandwich into the other.

Ali plays the prissy repressed artist – eating fried chicken disgustedly with the tips of his fingers – like a combination of Frasier Crane and an actual crane (the wading bird, not the building machinery).

The already infamous scene in which Tony white-splains Little Richard and Aretha Franklin to Don breaks new ground in cultural insensitivity. “These are your people!”

And yet the darn thing works. The gears engage. The motor runs smoothly. The destination is achieved. There are worse things in heaven and earth.