‘Lizzie Borden took an axe and gave her mother 40 whacks’ 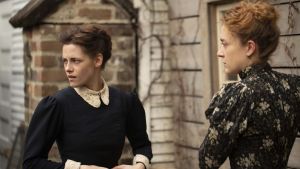 Lizzie Borden, was tried and acquitted in 1893 of slaughtering her father and stepmother, and yet the skipping rhyme named for her has enshrined her in American mythology: “Lizzie Borden took an axe and gave her mother 40 whacks. When she saw what she had done, she gave her father 41.”

Working from a screenplay by Bryce Kass, Craig William Macneill’s meticulous, deceptively quiet film takes its title character out of folk history and rewrites her as a queer proto-feminist battling against the worst excesses of patriarchal power.

Lizzie (Chloë Sevigny on top form) is an outspoken spinster – those things are not unrelated – who, against the wishes of her domineering father (Jamey Sheridan) and enabling stepmother (Fiona Shaw), attends the opera without a chaperone, where Alfredo Catalani’s aria sends her into a fit, somewhere between epilepsy and Stendhal Syndrome. At home she keeps pigeons and befriends the new Irish maid, Bridget (Kristen Stewart affecting a decent brogue), or Maggie as her stepmother calls her for the sake of domestic continuity.

Both Lizzie and her sister are facing possible destitution as the considerable family fortune will probably go to their stepmother, or worse, to sinister Uncle John (Denis O’Hare). Bridget, meanwhile, is raped nightly by Lizzie’s father.

We know from the outset that this cruelty is finally met with the savagery it deserves. As the film opens both he and his wife have been murdered. Later flashbacks fill in the details between fascinating insights into the contemporaneous legal system.

Given the cruelty meted out to all the women in the film, Lizzie ought to make for a very satisfactory revenge thriller. The director, however, carefully de-sensationalises every sexual and violent detail. The murder itself is a tricky, sticky business, solemnly and almost ritualistically performed.

The lesbian plot is not a new theory: it has been suggested by many Bordenologists over the years, including the late crime writer Ed McBain. The sexual encounter between Sevigny and Stewart is sensitively handled, framed by Noah Greenberg’s scrupulously clean cinematography, and gratifyingly staged as a slap in the face for the tyrannical patriarch, who peers in on the women through a window.

“You’re an abomination,” he shouts at his daughter, later. “Then at least we’re on equal footing, father,” she snaps back.