How damaged is Kevin Spacey after response to abuse allegations? 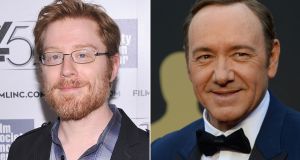 Anthony Rapp (L) has accused Kevin Spacey of making a sexual advance on him at a 1986 party when he was only 14 years old. Photographs: AFP/Getty Images 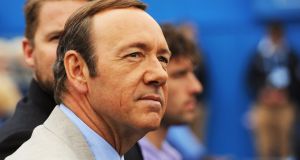 US actor Kevin Spacey: said he has chosen ‘now to live as a gay man’. Photograph: EPA

To say that Kevin Spacey’s response to allegations of sexual abuse is “problematic” would be to understate the case. He could hardly have made the situation worse. But he’s made it bad in a different way.

Actor Anthony Rapp, currently to be seen in television series Star Trek: Discovery, accused Spacey of sexually assaulting him after a party in 1986.

He said Spacey, who was 26, met Rapp, then just 14, at a club and invited him back to his apartment in Manhattan.

When all the other guests had gone, Spacey allegedly appeared at door of the bedroom where Rapp had been watching TV.

“My impression when he came in the room was that he was drunk,” the younger man said.

“He picked me up like a groom picks up the bride over the threshold. But I don’t, like, squirm away initially, because I’m like, ‘What’s going on?’ And then he lays down on top of me.”

Rapp says he escaped before anything more intimate happened, but the incident has haunted him ever since. The wave of accusations levelled against Harvey Weinstein prompted him to come forward.

Spacey’s statement slipped and slid around the central accusations. “I honestly do not remember the encounter,” he said. “But if I did behave then as he describes, I owe him the sincerest apology for what would have been deeply inappropriate drunken behaviour, and I am sorry for the feelings he described having carried with him all these years.”

I don’t know if I did it. If I did I was drunk. I am sorry if you are upset. The language could hardly be more couched.

What came next caused absolutely nobody to fall into any sort of dramatic swoon. No pince nez were dropped. No smelling salts were required.

“The story has encouraged me to address other things about my life,” he wrote. “As those closest to me know, in my life I have had relationships with both men and women. I have loved and had romantic encounters with men throughout my life and I choose now to live as a gay man.”

The revelation that Kevin Spacey is gay does not . . .

Sorry, I’ve got that wrong.

The revelation that Kevin Spacey chooses “now to live as a gay man” does not belong on the same shelf as the story of Rock Hudson’s homosexuality.

The information was known to only a circle of intimates and industry insiders.

It involves only a little hyperbole to suggest that Spacey’s story is closer to that of Liberace or Noel Coward. Only the most naive fans continued to believe that he wasn’t . . .

Sorry, I’m doing it again. Only the most naive fans continued to believe that he didn’t choose to live his life as a gay man.

Just remember the breathtakingly euphemistic language used in 2004 when Spacey was “mugged” by a “youth” while walking his dog on Clapham Common at 4am.

Every person has the right to keep quiet about his or her romantic life. But Spacey’s story did present puzzles.

There remains an unhelpful belief that the public will not accept a gay actor in a straight romantic leading role (though it is seen as perfectly fine for a straight person to play a gay character).

Even if this were true – and it probably isn’t – Spacey has never been a romantic lead. He has always been a character actor who occasionally stumbles to the top of the bill.

Announcing that he was gay was never likely to do any more damage to his career than a similar announcement did to Ian McKellen’s 30 years ago.

The specific nature of this announcement might, however, be damaging.

“I choose now to live as a gay man” sits only a few feet to the left of “I am a confirmed bachelor” or “I have not yet met the right woman”.

Introducing choice into the conversation plays into the hands of social conservatives who believe gay people can be talked out of their sexuality.

More serious still is the suspicion that Spacey has timed his (sort of) coming out to deflect attention from accusations of molestation.

Initial reaction from within Hollywood was not positive.

“No no no no no! You do not get to ‘choose’ to hide under the rainbow!” the comedian Wanda Sykes remarked.

“Kevin Spacey exploiting coming out as a gay man to try to distract from his assault on a 14-year-old is repugnant,” he tweeted.

Meanwhile, the victim gets lost in the fury of analysis.

Rapp has had the courage to speak out. His accusations involved one of the industry’s most powerful men. He deserves to be supported and celebrated.