Kevin Spacey apologises after being accused of sexual advance on minor 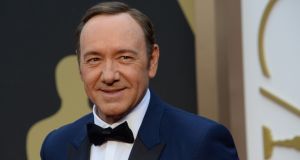 Actor Kevin Spacey: “If I did behave then as he describes, I owe him the sincerest apology for what would have been deeply inappropriate drunken behaviour.” Photograph: Robyn Beck/AFP/Getty Images

Actor Kevin Spacey has responded to allegations he made unwelcome sexual advances towards a 14-year-old actor in 1986, saying he did not remember the incident but if it happened it was likely “deeply inappropriate drunken behaviour” for which he sincerely apologised.

The Star Trek: Discovery actor Anthony Rapp had accused Spacey of traumatising him after a party in New York in 1986.

In an interview with BuzzFeed, Rapp alleged that Spacey, then 26, invited him and a 17-year-old friend to a nightclub, despite both being visibly underage, during which they were entertained in the VIP area by Spacey.

Rapp said Spacey then followed up with an invitation to a party at his Manhattan apartment, which Rapp attended.

Rapp said he spent much of the party “kind of bored” and watching television in the bedroom until late into the night, before noticing Spacey standing at the bedroom door and realising all the other guests had left the party.

He said Spacey “sort of stood in the doorway, kind of swaying. My impression when he came in the room was that he was drunk . . . He picked me up like a groom picks up the bride over the threshold. But I don’t, like, squirm away initially, because I’m like, ‘What’s going on?’ And then he lays down on top of me.”

to shine a light and hopefully make a difference, as they have done for me. 2/3

Rapp described the experience as “a frozen moment . . . In terms of fight or flight or freeze, I tend to freeze.”

Rapp said he believed Spacey was trying to “seduce” him but that he was able to “squirm” away soon afterwards, closing himself in the bathroom before telling Spacey he was leaving. “As I opened the door to leave, he was leaning on the front door [frame]. And he was like, ‘Are you sure you wanna go?’ I said, ‘Yes, goodnight,’ and then I did leave,” Rapp said.

A statement posted to the Spacey’s official Twitter account on Monday said: “I honestly do not remember the encounter, it would have been over 30 years ago. But if I did behave then as he describes, I owe him the sincerest apology for what would have been deeply inappropriate drunken behaviour, and I am sorry for the feelings he describes having carried with him all these years.”

Spacey, now 58, who has been defiantly private about his personal life in the past and whose sexuality has long been the subject of rumour and conjecture, addressed this directly in his statement, saying: “As those closest to me know, in my life I have had relationships with both men and women. I have loved and had romantic encounters with men throughout my life, and I choose now to live as a gay man. I want to deal with this honestly and openly and that starts with examining my own behaviour.”

Rapp said that for years he did not tell anyone about his experience. It wasn’t until Spacey’s career began to rise in the 1990s and 2000s that Rapp became angrier and more frustrated at the memory, saying his “stomach churns” when he sees Spacey now. “I still to this day can’t wrap my head around so many aspects of it. It’s just deeply confusing to me,” Rapp said.

Rapp also said that, as a gay man himself, he had found Spacey’s firm stance on his own private life deeply frustrating: “I wanted to scream to the rooftops: ‘This guy is a fraud!’”

Rapp attributed his ability to cope in the aftermath of the alleged incident to his acting training, and that he had “locked it away” within himself. But he also said there were times afterwards when he found seeing Spacey on screen and in person highly distressing, and that he dreaded the prospect of the two of them ever working together.

Rapp considered himself fortunate that “something worse didn’t happen” but also expressed incredulity that it happened at all. He says he considered talking to Spacey about the encounter but never did. He also considered legal action, but was advised he did not have grounds to make a case. He had previously told the story, with Spacey’s name removed, to the Advocate in 2001.

Rapp told BuzzFeed he felt compelled to come forward publicly in the wake of the wave of sexual assault accusations against disgraced industry mogul Harvey Weinstein.

In a series of tweets after the publication of the interview, Rapp said: “I came forward with my story, standing on the shoulders of the many courageous women and men who have been speaking out, to shine a light and hopefully make a difference, as they have done for me.”

Netflix’s ground-breaking political drama House of Cards will end after its forthcoming sixth season, the company said on Monday, one day after the sexual misconduct allegation emerged against star Spacey. Netflix also said in a statement that it was “deeply troubled” about Rapp’s allegation against Spacey. – (Guardian/Reuters)