The Irish actor has had 12 months of terrible films, in an otherwise sparkling career 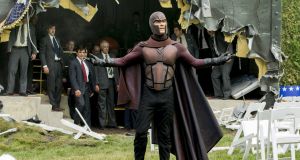 Any idiot could play Magneto. You just turn up, scowl a bit, throw a submarine at an aeroplane with your mind and then cash the cheque

The Snowman is a turkey. Everyone saw it coming, and now it’s happened. Audiences simply did not want to see Michael Fassbender play a man called Harry Hole in a film that was released before it was finished and marketed by a drawing of a Snowman who calls everyone “Mister Police”, like some sort of cut-price children’s entertainer. Lessons have been learned and everyone will move on.

Especially Michael Fassbender. The Snowman has been a rare blip in an otherwise sparkling career for him. That is, unless you count that terrible Assassin’s Creed film he made. Oh, and the compulsively underpowered Alien: Covenant. And Song to Song, a Terrence Malick film so Terrence Malicky that even Terrence Malick promised to stop making films like that now. And The Light Between Oceans and Trespass Against Us, two films that nobody – not even the handful of people who actually paid to see them – have thought about since the instant the credits rolled.

The trouble is that all these films have been released within the last 12 months. Michael Fassbender is now churning out a fresh disappointment every eight weeks; a frequency that makes Nicolas Cage look like Daniel Day-Lewis. It’s enough to make you wonder what went wrong.

Obviously you can’t lay all the blame at Fassbender’s feet. Sometimes the fates of the film industry misalign and bombard audiences with too much at once. For instance, Alien: Covenant and The Snowman were shot in 2016, Assassin’s Creed in 2015, Trespass Against Us and The Light Between Oceans in 2014 and Song to Song as long ago as 2012. Essentially, Fassbender has been unlucky enough to see half a decade of his hard work vomited out in one quick burst.

This high-density scheduling can be hugely damaging for a career - Jude Law’s Hollywood prospects took an almighty knock when I Heart Huckabees, Alfie, Closer, The Aviator, Sky Captain and the World of Tomorrow and Lemony Snicket’s A Series of Unfortunate Events were all released within a similar span, prompting Chris Rock to mercilessly attack him at the Oscars – but it’s not impossible to recover from. Fassbender just has to go back and concentrate on the fundamentals of his game.

Michael Fassbender is a capital A actor. His stock in trade is intensity, be it inner turmoil or overt rage. Given the right material, there’s very rarely anyone better on the day than him. And that’s the problem - the material often simply isn’t there. There isn’t a stockpile of unmade Steve McQueen projects for him to cherrypick. And even if there were, that’s no guarantee of success. Quite often Fassbender hitches his wagon to the star of a visionary director – notably Malick and Ridley Scott – only to see the projects wobble and falter when completed.

Fassbender also often falls prey to the classic actor’s problem of being drafted in to bulk up the gravitas of lesser films. The X-Men films are a classic case in point. Any idiot could play Magneto. You just turn up, scowl a bit, throw a submarine at an aeroplane with your mind and then cash the cheque. It’s easy. But Matthew Vaughn chose Fassbender because he had weight. And while it worked in the short-term – the X-Men movies are by far his most commercially successful films – it might have given him an unearned appetite for franchises.

He’s been upfront about his hopes that The Snowman would mark the start of a new franchise for him, and Assassin’s Creed was meant to be the first part of a trilogy. While you can understand his keenness – franchises are where the money is, after all – that’s just not who Michael Fassbender is at the moment.

Until now, his best roles have been his least commercial – a sex addict, a vicious slavemaster, a man with a cardboard head – and that’s the kind of knotty territory where audiences enjoy him most. He isn’t a bland romantic lead. He isn’t the empty cypher at the heart of a video game adaptation. He’s much more interesting than that. Fassbender has had a rough year, but if he hangs back and only makes the films that actually deserve him, he’ll end up with Oscars coming out of his wazoo. Doesn’t that sound better?