Hector and the Search for Happiness review: A first world solution to a first world problem 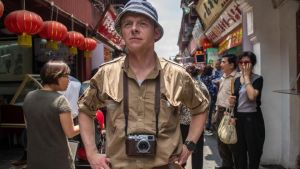 Who am I? Simon Pegg goes in search

Film Title: Hector and the Search for Happiness

Pop psychology, ahoy. When Hector (Pegg), a nervy, anal-retentive psychiatrist experiences some class of midlife crisis, he leaves his partner (Rosamund Pike) and sets off on a global tour so that he might learn the true meaning of happiness.

Might this elusive concept be found with other ladies? Our hero road tests one in China just to be sure. Might happiness be bound up with money? Hector thinks not, having encountered Stellan Skarsgård’s plutocrat. Then again, it makes for unlimited air miles and travel expenses. First World Problem, anyone?

Each leg of the journey results in new trite observations. Hector jots down these “findings” – sample gibberish: “Listening is loving” – in his journal, which is illustrated by quirky animations until, about halfway through the film, the cartoon budget seems to run out.

The self-help witterings and thoroughly privileged dilemmas are plenty irritating. Too often, Hector feels a bit like being entombed in a structure made from Mind Body Spirit tomes and cemented over with Chicken Soup for the Soul.

But the film swerves into even more problematic territory with its racial profiling. “Africa” is defined by gangsters, kidnappers and happy, clappy folks who invite you to their village for yam stew. And if you meet a nice Chinese girl, she’s bound to be a prostitute, right?

What (almost) saves Hector from its own inane hectoring is the presence of Simon Pegg, who maintains a disarming, likeable beam, even when his character is a blistering ball of self-regard. As Pegg vehicles go, this falls well below Run, Fatboy, Run and takes us into the How to Lose Friends & Alienate People range. Happily, co-stars Pike and Collette bring some much needed common sense into this oddly shaped misfire. Unsurprisingly, the screenplay is based on a self-help novel by Francois Lelord. Equally unsurprisingly, the film is directed by Peter Chelsom, the erratic talent behind Hear My Song and Hannah Montana: The Movie.