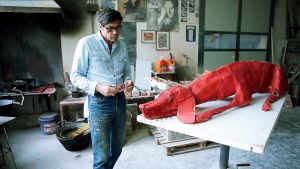 Viewers with an appetite for the purer variants of slow cinema – think Two Years At Sea and Le Quattro Volte – will find plenty to savour in this patient Italian documentary.

Winner of the Fipresci (International Federation of Film Critics) prize at the Berlin International Film Festival, Francesco Clerici’s short debut feature is a focused study of a historic bronze foundry in Milan that still uses lost-wax casting, a technique that dates back to the fourth century BC.

Dialogue-free – save for an instruction to fetch a crane, a worker comparing the wax to custard and the hum of a radio – Hand Gestures holds fast to its title, as various craftsmen toil on a sculpture by the artist Velasco Vitali.

The piece being created might best be described as a deconstructed dog, replete with visible joins and cartoonish ears.

Occasional archival inserts of the same foundry make for an interesting artistic comparison: Vitali’s abstract canine is – literally and figuratively speaking – a very different animal from the classic roman-nosed bronzes and torsos fashioned during the 20th century. The dog looks rough-hewn but is anything but. Over an unspecified duration, workers painstakingly layer goop upon goop.

The assiduous process will not hold much appeal for those waiting impatiently for an X-wing fighter chase, but as with the goop, there are layers of craft in evidence.

- Hand Gestures is showing at the IFI in Dublin. Following the 6.30pm screening on November 24th, 2015, director Francesco Clerici will be at the IFI for a Q&A hosted by artist Rachel Joynt. See ifi.com for more details