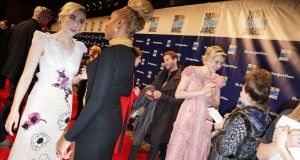 Saoirse Ronan chatting to Mary J Blige on the red carpet at the IFP Gotham Awards in November, while Greta Gerwig is interviewed. Ronan won an award for her role in Lady Bird, which Gerwig directed. Ronan has also been nominated for a Golden Globe award. Photograph: Rebecca Smeyne/The New York Times

Saoirse Ronan continues a seemingly inevitable run to a third Oscar nod with a nomination for best actress (comedy or musical) at the upcoming Golden Globes.

In the television section, Catriona Balfe, the Irish actor and model, confirmed herself as a Globes regular with a third nomination for best actress in a series for Outlander.

Ronan’s nomination came for playing a rebellious teenager in Greta Gerwig’s hugely praised directorial debut Lady Bird. She will be seen as a slight favourite to win in that category. Margot Robbie, incandescent as the figure skater Tonya Harding in I,Tonya, will, however, give her a run for her money.

Co-produced by Angelina Jolie, The Breadwinner concerns a young girl in Taliban-controlled Afghanistan who must dress as a boy to support her family. The picture recently triumphed at the Los Angeles Film Critics Association, but it will struggle to get past Pixar’s more high-profile Coco.

Guillermo Del Toro’s The Shape of Water, an eerie fantasy concerning the romance between a mute woman and a sea creature, topped the film nominations with seven mentions.

Three Billboards Outside Ebbing Missouri, the third feature from London-Irish writer-director Martin McDonagh, was just behind with six nominations. McDonagh himself gets in for writing and directing.

As ever, pundits were discussing “snubs” before the announcement at dawn in Los Angeles has properly finished. Most conspicuously, Kumail Nanjiani’s The Big Sick, seen as a contender in all comedy categories, received not a single nomination. Holly Hunter, who plays an eccentric mom in the film, is (or was) seen as one of those most likely to register in the Oscar race for best supporting actress.

Jordan Peele’s Get Out, a satirical horror concerning the racial divide, scored in the comedy/musical categories for best picture and best actor, but there were no mentions for writing and directing. Two years after the #oscarssowhite debacle that may raise one or two heckles. There will be even greater unease at the news that no woman has registers in the best director race. Greta Gerwig was surely just outside the final five.

The Golden Globes are organised by the relatively small huddle of often-obscure journalists aligned with the Hollywood Foreign Press Association. Their reliability as a pointer to Oscar success is sometimes exaggerated, but an acknowledgment certainly demonstrates that you are in the race.

Ronan will have a tougher fight on her hands at the Oscars as, unlike the Globes, they do not split top awards into drama and comedy/musical categories. Her main competition for the Academy Award looks to be Robbie for I, Tonya, Sally Hawkins for The Shape of Water and Frances McDormand for Three Billboards Outside Ebbing Missouri.

Meryl Streep will probably take the fifth Oscar nomination for her role as proprietor Katherine Graham in the hugely enjoyable The Post, but that performance has “sure nomination, no win” written all over it.

The Cartoon Saloon story remains an extraordinary one. Both that studio’s The Secret of Kells and Song of the Sea received Oscar nominations for best animated feature. The Breadwinner looked to be in trouble when the Academy changed its rules so that all members rather than just animation specialists (more tuned in to independent features) could vote for the nominations.

The film has, however, performed strongly so far in awards season and the Saloon can expect good news when Oscar announces its shortlist next month.

Call Me by Your Name

Timothée Chalamet, Call Me by Your Name

Sally Hawkins, The Shape of Water

Michelle Williams, All the Money in the World

Steve Carell, Battle of the Sexes

Daniel Kaluuya, Get Out

Emma Stone, Battle of the Sexes

Armie Hammer, Call Me by Your Name

Richard Jenkins, The Shape of Water

Christopher Plummer, All the Money in the World

Octavia Spencer, The Shape of Water

Ridley Scott, All The Money in the World

First They Killed My Father

The Greatest Showman - ‘This Is Me’

Aziz Ansari - Master of None

Sterling K. Brown, This is Us

Chrissy Metz - This is Us

Michelle Pfeiffer - The Wizard of Lies

Best Television Limited Series or Motion Picture Made for Television

Top of the Lake: China Girl