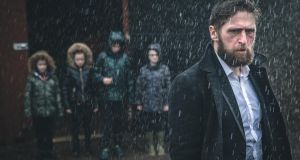 There were guests of note. On the Saturday afternoon, Kate O’Toole, chair of the Fleadh, hosted a lovely conversation with fellow actor Keith Carradine. The chat was mostly about Carradine’s work on such legendary projects as Deadwood and Nashville, but the two also found time to share reminiscences about living with near-legendary fathers. It’s not easy following in the footsteps of Peter O’Toole and John Carradine.

“One of my greatest disappointments concerned your father,” Carradine said. “He was top of the tops for me. What a legacy. I never got to work with him and I never got to meet him. I suspect he and my dad might have had a great conversation.”

Earlier, the Fleadh got the team behind the music for Normal People — the TV hit of the summer — to talk us through composition, mood-setting and the selection of pre-existing material. “It’s all about your breath,” composer Stephen Rennicks joked. “Throughout all the tracks there is a sense of breathing. It is a short step from there to the sense of heavy breathing.”

Come Sunday night, as ever, there was an awards presentation. Philip Doherty’s Redemption of a Rogue, a dark and windy comedy from deepest Cavan, pulled off the rare feat of winning best Irish film and best first Irish feature. Pat Collins’s wonderful Henry Glassie: Field Work, which we covered at the Toronto International Film Festival, won best Irish documentary.

It’s there in black and white.

Yet all of this happened online. There were no crowds outside the Town Hall Theatre. No Q&A’s led onto late-night booze-ups at the Rowing Club. The organisers are to be commended for ensuring that continuity was maintained. An efficient website allowed punters to view the films from scheduled points between Tuesday and Sunday. (If you really wanted to replicate the Fleadh experience the option was, happily, still there to start every film 30 minutes late.)

Credit must also be directed towards the producers and distributors who allowed their work to premiere in these unusual circumstances. Nobody had to do this. But the system worked.

Redemption of a Rogue casts Aaron Monaghan as a bearded man who seems to have lost the will to live even before landing in the miserable town of his birth. Before long he has bought a coil of rope and has begun plotting his own death. Things get more gloomy still. His father dies and leaves a will stipulating that no money can be inherited if he is buried while it is raining. Quite a challenge in Cavan. The film plays a little like a comedy version of a Nick Cave song. There are conversations with the Virgin Mary, visions involving duelling coffins and glum musings on the pointlessness of sex. The humour is, perhaps, not quite sharp enough to live with the prevailing Beckettian pessimism, but this is an interesting adventure in creative weirdness.

Less successful was Eoin Macken’s long-awaited adaptation of Rob Doyle’s cult novel Here Are the Young Men. This is another of those post-Trainspotting dramas (the Dublin Fringe Festival is full of them) concerning dissolute, verbose youngsters taking drugs in a fizzing urban environment. Dean-Charles Chapman, Finn Cole and Ferdia Walsh-Peelo exchange pretentious non-sequiturs in a film whose reach exceeds its grasp. It may still find an audience.

Lina Luzyte’s The Castle offered a more disciplined, more measured meditation on life as a young person in the nation’s capital. Set among the city’s Lithuanian community, the picture follows a young musician as she gathers the money to buy back her recently hocked keyboard. Boasting a great sense of place, The Castle begins in the same territory as the Ken Loach of Raining Stones. It takes one too many melodramatic turns in its middle sections, but the superb performances — notably Barbora Bareikyte as the juvenile lead — hold this charming film together. It deserves a release.

Also making a first Irish appearance was Phil Sheerin’s intriguing rural melodrama The Winter Lake. From a script by the increasingly busy David Turpin, the picture brings a mother and son to a damp Irish plain where they interact tensely with a neighbouring father and daughter. Emma Mackey, Charlie Murphy, Anson Boon and Michael McElhatton form a tight, tense huddle in a film that has things to say about atypical family units.

Further hats off to Dave Minogue’s Poster Boys. The road movie makes the best of its limited resources as it sends a young man and his nephew about the country putting up posters in bars. There is little we haven’t seen before, but it plays its familiar tunes with gusto.

The highlights among this year’s Irish features were, however, mostly in the unusually fecund documentary section.

Two excellent Irish-produced films took contrasting looks at the American approach to crime and punishment. Grace Sweeney’s The Sheriff went among candidates for the titular office during the 2018 midterm elections and asked all the right questions. Academics explain how the elected sheriff — inconceivable in this country — has become a pillar of the Trumpian law-and-order agenda. The film is wide-ranging, dynamic and cunningly structured.

Trevor Birney’s The Dakota Entrapment Tapes tells the scarcely believable story of how a police officer turned an ordinary student towards a perilous life as an informer after he was caught selling a small amount of marijuana. Falling back on archive footage and moving interviews with the young man’s parents, The Dakota Entrapment Tapes reminds us of the many unexpected casualties in the US’s war on drugs.

Jason Branagan’s Breaking Ice took a basic approach — talking heads and mildly animated sketches — to tell us the fascinating tale of the first Irish bobsleigh team. The former rowers, first people ever to appear in both winter and summer Olympics, are here to dispel any notion that they were a novelty act to compare with Eddie the Eagle. These guys took the sport seriously, understood the risks and laid the foundation for a continuing national engagement with winter sports.

Another brace of films took different angles on the struggles of rural communities. Margaretta D’Arcy, a veteran in many fields, returns with A Maverick Islander, a 52-minute study of amiable eccentric Seán Ó Loingsigh from south Connemara as he seeks to construct a golf course in the most unlikely corner of the peninsula. It’s a smaller film, but no less enjoyable for that.

In The Tribe of Gods, Loïc Jourdain attempts a more comprehensive study of the weather-battered Tory Island, west of Donegal. Jourdain dares to take us among bureaucratic squabbles involving fishing rights (still ongoing) and the fate of the ferry. The picture is, however, most memorable for its treatment of Patsy Dan Rodgers, the “last King of Tory”. The film concludes with lightning forks, a descending helicopter and the convincing assertion that “Tory will always come back to life”.

The Film Fleadh opened triumphantly with the Irish premiere of Aideen Kane, Lucy Kennedy and Maeve O’Boyle’s The 8th. Viewers might reasonably suspect tat they have already heard everything there is to be said about the campaign to remove the Eighth Amendment, but the directors manage to retell the story of abortion rights in a gripping and moving fashion. The focus is the warm, inspiring campaigner Ailbhe Smyth.

The film is fascinating (and frank) on strategic compromises and economic in its treatment of the campaign’s prehistory. Though undeniably partial — all documentaries are — it still finds time to listen to “no” campaigners such as Wendy Grace and John McGuirk.

For this writer, the film of the Fleadh was Gillian Marsh’s Tomorrow Is Saturday. For the last few decades, Seán Hillen, a Newry man of engaging disposition, has been among the most important — if insufficiently celebrated — of Irish artists. Best known for his collages involving John Hinde postcards, he is now dealing in photographs of cloud formations that, he claims, reveal hidden secrets about the universe.

Marsh’s beautifully arranged film meshes contemporary footage — Hillen in his tiny, packed house — with a history of his progression from Newry to the Slade School in London and back to Dublin. The film reveals a kind man who, unlike many artists, is happy to explain the motivations and underpinnings of his consistently accessible work.

Tomorrow Is Saturday ends with a startling epilogue as we see Hillen, now somewhat hairier, dealing admirably with the demands of the Covid crisis. Is this the first lockdown feature? For that alone it deserves celebration.

THE AWARDS OF THE 32ND GALWAY FILM FLEADH

The Tiernan McBride Award for Best Fiction Short in association with Network Ireland Television: The Invisible Boy by James Fitzgerald

Best Short Documentary in association with TG4:  How to Fall in Love in a Pandemic by Michael-David McKernan

Winner of the Pitching Award: Alice McDowell for Rain Song

4 The 20th century belongs to America

5 Ten years after, the Romanian revolution has a long way to go