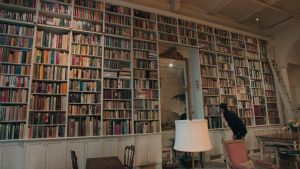 Adam Weinberger in The Booksellers

Deep into this lovely documentary, one contributor suggests the bookshop browser is a rarer creature than he or she once was. The argument goes that customers – raised on internet search facilities – now enter the shop with one particular title in mind. Well, maybe. If the echo chambers of social media are to be trusted (and they probably aren’t), more than a few browsers missed the amble around bookshops during lockdown as much as they missed pints, haircuts or bowling alleys.

DW Young’s film, a study of New York’s independent and antiquarian booksellers, looks to have modelled itself on that aimless pleasure. Never aspiring to anything like a structure, it meanders from shelf to shelf, sometimes picking up a volume and placing it straight down, sometimes leafing more carefully through the pages.

We move from a high-octane auction at Christie’s to the bustle of the famous Strand Bookstore near Union Square and on to younger enthusiasts for hip-hop publications. There is a hint of historical progression. Some arguments are developed. But this is more of a considered anthology than a closely argued treatise. (Is that enough literary analogies?)

The film has an equivocal relationship with cliches about the sellers of old books. During opening remarks, we see a montage of such diverse films as Boudu Saved from Drowning, 84 Charing Cross Road and The Neverending Story. The antiquarian in each movie is an older white man with a penchant for tweed.

Sure enough, a fair number of those interviewed meet that description. The popular notion that cats habitually lurk in such places is supported by captivating turns from moggies of all sizes. Always fantastic value as a talking head, Fran Lebowitz recalls the owners of the largely vanished stores in Fourth Avenue. “Little dusty Jewish men who got irritated if you wanted buy a book,” she says.

Young is, however, also keen to confirm that women have long been drivers in the business. We hear the fascinating story of how Leona Rostenberg and Madeleine B Stern, pioneers in mid-century, revealed that Louisa May Alcott, writing under a pseudonym, had been the author of breathless sensation novels. In the present day, younger women relate how they still struggle with gender prejudice in a stuffy business.

Those observations aside, The Booksellers deals largely in celebration of a trade that, if not quite in peril of extinction, is certainly going through a post-internet contraction. The changes are not always what you might expect. As has been the case forever, older folk moan that Young People Today are no longer reading books (the fervent YA scene would suggest otherwise). The legendary “book scouts” who used to hunt down obscure volumes are no longer in much demand. We could have guessed that.

More surprising is the news that the online changes have skewed the antiquarian business away from mid-level titles – “modern firsts” for example – and towards glamorous rarities that can sell for the price of a large house. “The internet changed what was rare,” a contributor explains.

There is some pessimism about the future of the book itself. (It’s impossible to watch the film during the current crisis without wondering how many of these small businesses survived lockdown.) Antiquarians speak about how a physical object can tell stories in a way that no bundle of digital data could ever manage. Reference is made to Larry McMurtry’s touching speech on winning an Oscar for adapting Brokeback Mountain in 2006. “I am going to thank all the booksellers of the world,” he said. “From the humblest paperback exchange to the greatest bookshops in the world – all are contributors to the culture of the book.”

The younger interviewees here seem confident that culture will survive. They still see books on the subway. They still meet contemporaries who disdain the Kindle. But Lebowitz is among those mourning a loss of character.

“You know what we used to call independent bookshops?” she snorts. “Bookshops!”

Available to stream from June 30th

Kathleen Edwards: ‘I became terribly depressed and needed something to change’
7