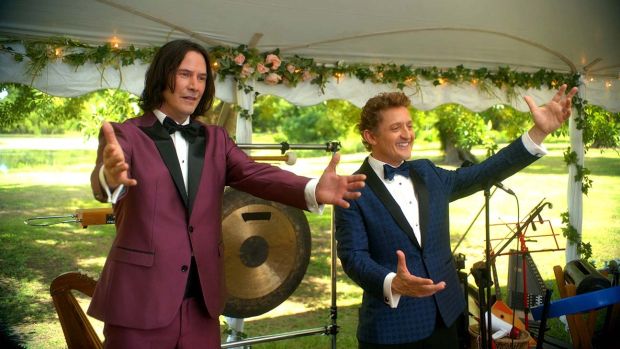 It’s 2020 and middle-aged dads Bill Preston (Alex Winter) and Ted Logan (Keanu Reeves) are still trying to write the prophesied song that will unite the world. If anything, their post-prog theramin and bagpipes compositions seem to sow disunity.

Their princess wives (Erinn Hayes and Jayma Mays) are concerned but their music mad daughters Billie (Samara Weaving) and Thea (Brigette Lundy-Paine) remain obliviously optimistic. When the daughter of their former time-travelling mentor arrives to give them a poke, Bill and Ted are whisked away to the future, where a ruling Holland Taylor gives them a firm talking to.

The heroes of the title have less than two hours to write a song that will save the very fabric of the universe. Elsewhere, their daughters set off to put together history’s starriest supergroup featuring Jimi Hendrix, Louis Armstrong, Wolfgang Amadeus Mozart, Ling Lun and a quantum-splaining Kid Cudi.

Long-awaited sequels are a tricky business. For every franchise-resurrecting Creed, there’s a dozen unlovely choices. (The Two Jakes or Blues Brothers 2000, anyone?) Threequels are no picnic either. Remember the deathly dull Transformer politics of Dark of the Moon? No?

Arriving some 30 years after Bill & Ted’s Excellent Adventure (1989) and Bill & Ted’s Bogus Journey (1991), Bill & Ted Face the Music is a whole telephone-booth jump from its predecessor and, we’re happy and relieved to report, an absolute delight.

Franchise fans are sure to revel in returning appearances from the Grim Reaper (William Sadler), Missy (Amy Stoch) and Ted’s dad (Hal Landon jnr). Nostalgia, however, is only part of the appeal. Screenwriters and character creators Chris Matheson and Ed Solomon have crafted a lovely, unabashedly silly confection with a light dusting of midlife contemplation.

Winter and Reeves retain the earnestness of old, but they’ve tempered the wide-eyed enthusiasm now found in their screen scions. The latter duo make their gender-swapped Bill and Ted roles entirely their own. And a surrounding constellation of funny women – including Kristen Schaal’s temporal tour guide and Jillian Bell’s alarmed therapist – bring a very female energy to this most excellent instalment.

Bill & Ted Face the Music is on general release