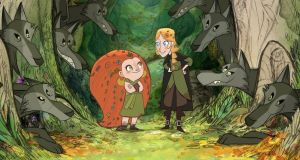 The ongoing virtual incarnation of the Toronto International Film Festival (Tiff) is a slightly unsettling experience for anyone familiar with the live event. It’s very different.

Sitting on one’s couch 5,000 miles from Lake Ontario, one rather misses the daily ride up the slow escalator in the Scotiabank Cinema on Richmond Street.

But some things are a little bit the same.

Cameron Bailey, festival director, is not here to remind us that Toronto is built on “the traditional territory of the Anishinaabe, the Wendat, and the Haudenosaunee,” but a written message repeats the words that Tiff attendees hear before every film. This year they are preceded by encouragement to “reflect on the history of the land that you are watching from”.

One could hardly do otherwise when watching the latest film from Cartoon Saloon. Tomm Moore and Ross Stewart’s Wolfwalkers is presented as completion of the “folklore trilogy” that the Kilkenny operation began with The Secret of Kells in 2009 and continued with Song of the Sea five years later.

Set in and around the studio’s home city during the Cromwellian atrocities of the 17th century, the picture follows two young girls making an unlikely friendship amid different colours of chaos.

More focused on action than the earlier films, a little less at home to whimsey, it rattles along with the force of an epic tale told compellingly round an ancient campfire. The animators make lovely contrast between the flat geometric grids of the ancient city and the organic whorls of a surrounding countryside. The final conflagration is thrilling.

UK viewers unfamiliar with Cromwell’s reputation in Ireland may be surprised to see The Lord Protector – unless I missed it, his name is never spoken – presented as an even more horrid version of Vincent Price in Witchfinder General. Simon McBurney’s oily voicework helps sharpen a villain for the ages.

But, lest the Daily Mail get concerned, Wolfwalkers proves to be largely conciliatory in its politics. Robyn Goodfellowe (voiced sweetly by Honor Kneafsey), the protagonist of the piece, is a northern English girl caring for her decent wolf-hunter father (the indomitable Sean Bean) in trying circumstances.

“At least the old King kept us safe,” one Kilkenny citizen says as viewers ponder that Michael Collins still of Stephen Rea and his list.

Robyn makes friends with a shape-shifting creature and together they race us through an unlikely combination of folk horror and Inglourious Basterds. Vulgar though it is to mention Oscars at this early stage, there is no reason to suspect Wolfwalkers will not build on Cartoon Saloon’s record of three consecutive nominations for best animated feature (Nora Twomey’s The Breadwinner was also nominated in 2018).

In truth, not everything at digital Tiff ran as smoothly as one might have hoped. Some of the most prominent movies were either available to nobody online or were available in only a few territories.

No screener was, for example, offered of Francis Lee’s Ammonite. That film, starring Saoirse Ronan and Kate Winslet as fossil hunters in 19th century England, received largely positive reviews from in-person showings. Chloé Zhao’s Nomadland, starring Frances McDormand as a woman adrift in America, and David Byrne’s American Utopia, record of a Byrne show by Spike Lee, were, apparently, “not available in your country”.

Nomadland won the Golden Lion at Venice shortly after Tiff kicked off and is now a confirmed contender for Oscars. Happily, remote Toronto punters were able to watch the winner of the best actress prize from the Italian event.

Vanessa Kirby, who gained fame as Princess Margaret in The Crown, is eye-wateringly intense as a woman coping with bereavement in Kornél Mundruczó’s riveting, if melodramatic, Pieces of a Woman.

Kirby strains every sinew in a performance that would not shame Gena Rowlands in her pomp. Burstyn is equally strong as a woman eager to apportion blame.

Neil Young, the distinguished Wearside programmer who acts as the film community’s unofficial oddsmaker, tells me he already has Kirby down as odds-on favourite for the best actress Oscar.

Also attracting attention over the opening weekend was Regina King’s One Night in Miami. King, who won the best supporting actress Oscar for If Beale Street Could Talk, imagines, for her directorial debut, a situation in which Muhammad Ali, Malcolm X, Jim Brown, and Sam Cooke meet up after Ali (then still Cassius Clay) beats Sonny Liston in 1964.

They discuss Ali’s coming embrace of The Nation of Islam, Malcolm’s drift away from that organisation and Cooke’s growing awareness that he needs to address the civil rights struggle in his music.

Footballer Jim Brown (Aldis Hodge), easily the least known personality on this side of the Atlantic, has a chilling scene in which, after sharing an apparently friendly chat with a white mentor from his home state of Georgia, he is matter-of-factly told: “you know we don’t let [n-word]s in the house”.

Much of the rest of the film feels like the play from which it was adapted. Actors declaim. Long sequences take place in the same location. That is initially a problem. But the performances are so delicious – Eli Goree is a tone-perfect Ali – that one soon stops caring.

Hearing that Limbo, Ben Sharrock’s debut, concerns asylum seekers on a remote Scottish island, one could be forgiven for expecting a sombre, worthy Play for Today.

The extraordinary opening sequence, in which patronising officials deliver a drama aimed at instructing their charges how to interact with the opposite sex, immediately confirms we are going in a different direction.

That sequence, playing like something from a Roy Andersson film, is typical of a drama that balances absurdity with poignancy throughout. Amir El-Masry is superb as an oud player who carries out desperately sad conversations with relatives in Syria.

Dawn Porter’s The Way I See it is a meat-and-potatoes documentary on Pete Souza, who was official White House photographer to both Ronald Reagan and Barack Obama. Pete is seen as talking head and as public speaker. Various officials pop up to discuss his role.

No documentary conventions are defied, but Presidential watchers will rejoice in the delicious images and revel in anecdotes about two very different politicians. His comparison between the photograph of Obama and team watching the death of Osama bin Laden and that of Trump apparently observing the killing of Abu Bakr al-Baghdadi is telling. Why is Trump looking straight into the camera? What’s he actually looking at?

There were better films at Tiff than Glendyn Ivin’s Penguin Bloom, but none that so worked so ruthlessly on the viewers’ capacity for sentimental abandon. Naomi Watts plays a woman who befriends an injured magpie after becoming paralysed in an accident. She heels the bird. The bird heels her. What’s that choking noise I hear?

There really are advantages to the remote Tiff. Yes, you don’t get the big screen and you don’t get the communal experience. But nobody can see you blubbing like a little baby during the nice animal film. Which is not to imply I shed the smallest drop.

‘Conor McGregor is an inspiration. There’s a severe vulnerability to him’
9