Fire at Sea review: a visceral call to arms from those left to ferry the corpses 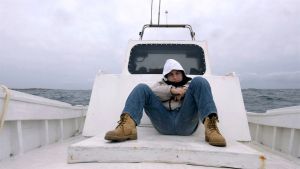 Fire at Sea: The horrors unfold with a stately, procedural crawl

Giuseppe Rosi’s Golden Lion-winning previous film Sacro GRA, took a meandering approach to a ring road outside Rome. The associational film displayed something like the patient observational skills of Fred Wiseman, but its wilful shapelessness might have benefitted from psycho-geographical narration.

Fire At Sea, which scooped Berlin’s Golden Bear this year, utilises the same film-prose, docu-fiction methodology as Sacro GRA, but is made altogether weightier by virtue of its location. It’s almost as if Rosi was answering those critics who saw Sacro GRA and said: ‘It’s a lovely thing but what is it for?’

Life on the Italian island of Lampedusa has changed little over the past century. Boys make slingshots and practise birdcalls. The wives and mothers of fishermen call in to the local radio station to request old-fashioned Sicilian tunes. A drip-feed of details concerning Samuele, the charismatic 12-year-old at the centre of the film, coalesces into a record of childhood routine: Samuele gets a patch for his lazy eye, Samuele eats spaghetti, Samuele and friend cut out “eyes” from cacti to use as target practise.

Elsewhere, there are other routines with unhappy outcomes. Recalling Hannah Arendt’s treatise on the banality of evil, Fire at Sea chronicles the drudgery of the migrant crisis. Cruisers and patrol boats pull body after body from the sea. A local doctor explains that while his colleagues imagine he’d be used to corpses by now, you never get used to seeing dead children or dead mothers who have given birth on sinking ships, and still have infant and umbilical cord attached.

At night the coastguard responds to calls from leaking boats carrying hundreds of migrants: “God help us” or “save us”. Young survivors perform spiritual raps reminding us that they have fled bombing in Nigeria, starvation in the Sahara desert, and Isis oppression in Libya, only for most of their number to die on vessels that make Famine-era coffin ships look comparatively luxurious.

Rosi disguises the urgency of these unfolding horrors with a stately, procedural crawl. There is no political grandstanding or direct campaigning, but this is a call to arms from those left to ferry the corpses.

The Italian prime minister Matteo Renzi has presented each head of state in the EU with a copy of the film. Let’s hope they got around to watching.