Journey’s End: A serious version of ‘Blackadder Goes Forth’

Review: Long camera takes give a sense of the claustrophobia of life in the trenches 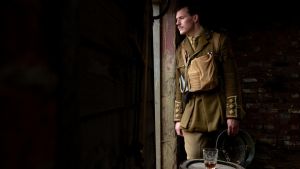 Journey’s End succeeds mostly in the smartness of its casting

A certain class of film buff will identify Journey’s End as the work that gave the world James Whale. After producing the West End production of RC Sherriff’s resilient 1928 play – an early marker in first World War iconography – the director went on to direct the film version in 1930. Whale’s Frankenstein and immortality followed.

Journey’s End has survived. Set in the trenches during the last year of the war, it is a wonder of old-fashioned economy. Many are the repertory theatres that have staged productions.

The problem for film-makers is that, whereas theatre has a problem with the violent excesses of war, cinema positively revels in explosions, strafing and mass sacrifice. The viewer is bound to wonder why we’re spending so much time in conversation.

Saul Dibb’s new version does not strain itself in opening out the drama. One significant action sequence, off-stage in the play, is enacted in hurried, confused cuts. The characters have visions of coming horror. But the picture succeeds mostly in the smartness of its casting.

Asa Butterfield is box-fresh as a class of character that went on to become a little too familiar: the inexperienced enthusiast ripe for imminent dissolution. The increasingly strong Sam Claflin – good in last year’s Their Finest – twitches convincingly as the booze-soaked commanding officer who has seen plenty and understood too much. Paul Bettany holds them all together as a warm officer – formerly a schoolmaster – who asks the boys to call him “Uncle”. It’s a painful touch, a reminder that his charges are barely more than children.

Laurie Rose shoots in long takes that give some sense of the claustrophobia and the unreality of life in the trenches. The low throbs that characterise Natalie Holt’s score add effectively to the sense of looming dread. (Trivia alert: it was Holt who threw eggs at Simon Cowell during an episode of Britain’s Got Talent.)

The story has, alas, been told a little too often in the many decades since the play’s premiere. Blackadder Goes Forth plays very much like a comic version of the same yarn. It is, nonetheless, worth allowing the old warhorse one more circuit of the track.