Bad sex in the movies: from Top Gun to Fifty Shades 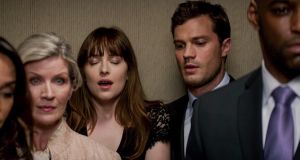 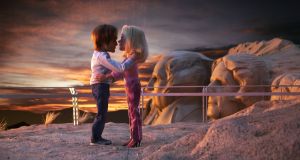 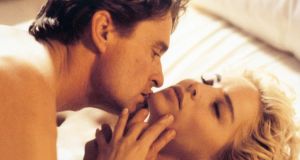 Yeah, mate. That’s why pornography focuses so closely on people not having sex. You pay extra for the really hard stuff that features Danish people pining mournfully in separate rooms.

As Valentine’s Day looms and – no coincidence this – Fifty Shades Darker oils its way into cinemas, we are reminded that perennial Big Fat Bore is asking the wrong question.

The history of sex scenes in the movies is a sorry tale of awkwardness, bad taste, pretention and evasion. Take the words “but what about Don’t Look Now?” out of the conversation and you’re bound to conclude that film-makers are better off not bothering.

More often that not Hollywood gives us the tastefully coy variety. When it was announced that Universal was making a film of E L James’s Fifty Shades of Grey – a publishing sensation that annihilated entire forests – many pundits felt that the material might be a little spicy for everyday viewers. This was, after all, a book about people walloping one another for sexual kicks.

The script worked enormously hard to confirm that consent was the greatest aphrodisiac. The film-makers worked harder still to strip the sex scenes of even the faintest hint of grime or danger.

What we ended up with was a mildly racy perfume commercial interrupted by advice from an over-protective uncle.

“You shouldn’t get drunk like that. I’m all for testing limits, but you put yourself at risk last night,” Jamie Doran says to Dakota Johnson. The whips and gags are all right. But don’t be having a third Babycham. Fifty Shades Darker, the imminent sequel, needs not do much to further strain boundaries.

All this would have come as a terrible shock to the (largely male) sexual taste-makers of the 1970s. In the aftermath of the previous decade’s social revolution, a belief emerged that, freed of repression, consumers would now soak up pornography with the uncomplicated glee they brought to baseball or soap operas.

The more explicit school of sex scenes retreated to the art-house archipelago that gave us Last Tango. It was there that we eventually endured unsimulated intercourse in Michael Winterbottom’s Nine Songs, Vincent Gallo’s The Brown Bunny and Lars Von Trier’s Nymphomaniac. Don’t worry. That noise you hear is the vigorous rubbing of chins.

Abdellatif Kechiche’s Blue is the Warmest Colour, winner of the Palme d’Or at Cannes in 2013, made a convincing case for the inclusion of explicit sex. The scenes between Léa Seydoux and Adèle Exarchopoulos were intended to communicate the uncontainable passion of their relationship. Trouble still ensued. The crew complained of moral harassment. Gay writers argued that the sequences felt inauthentic and exploitative.

Meanwhile, popular cinema settled for a faux raciness that rarely risked pushing the temperature above ambient levels. Notoriously awful films such as Body of Evidence showed the dangers of striving for the risqué. This was that 1993 thing in which Madonna dripped candle wax on Willem Dafoe’s unprotected manhood. “Madonna just seems busy, like someone trying to follow directions on how to microwave a 25-pound turkey in six minutes,” Vincent Canby of the New York Times wrote at the time.

More common was the sleazy, low-energy romp perfected (if that is the word) in Tony Scott’s Top Gun.

Here was the confirmation that audiences didn’t want sex in movies to look much like sex in real life. If it’s too convincing then atavistic discomfort sets in. Sax sex is the acceptable wipe-clean alternative.

Explicit sex almost never works in marquee cinema. That is the lesson of the hilarious, masterful frolic in Trey Parker and Matt Stone’s Team America: World Police. Every dreadful cliché is parodied in a sequence that proves almost as funny as Michael Douglas’s attempts at uninhibited passion in Basic Instinct. The human animal is too inhibited to view that level of abandon without laughing. “But what about Don’t Look Now?” I hear you wail. Well, that famous scene between Donald Sutherland and Julie Christie is elegant, tasteful and much accompanied by flutes. That’s to say it’s as much of a fantasy as was Star Wars.

Even before confirmation arrived that Maria Schneider had not been fully briefed on the grimier details, her character’s near rape by Marlon Brando had been reclassified as a pretentious, offensive absurdity. It is bizarre to recall how seriously the film was once taken.

On a lighter note, the (literally) blue sex scene between Tom Cruise and Kelly McGillis is now impossible to watch without howling. Scored to Berlin’s Take My Breath Away, the sequence frames the couple in the sort of silhouette you expect to find on the packaging of classier condoms. Hopelessly influential for all that.

An accidental masterpiece of repressed coyness, the scene is best remembered for Kate Winslet’s hand plastering itself on the condensation-fogged car window. But don’t forget her delicately whispering “put your hands on me” to the supposedly rough-hewn Leonardo DiCaprio. Maybe such things were said in 1912.