Less may be more, but much more is much, much more - and no stunt is too crazy or extravagant for this barmy franchise 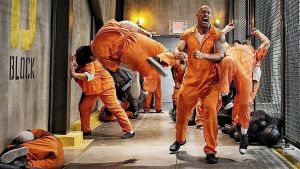 Get to the car: Dwayne Johnson ploughs through the opposition in Fast and Furious 8

The Fast and Furious team must answer to God for not ending episode eight with a submarine ploughing its way down the Las Vegas strip. Yes, I know Nevada is inland, but that would still be among the less improbable events in this ludicrous, undeniably diverting mechanism for loosening yuán and baht from non-Anglophone cinemagoers.

How did we get here? Let me bark out exposition while driving a Lamborghini Absurda across a lake of fire. Fifteen years ago, Rob Cohen directed a very nifty, modestly budgeted drag racing film called The Fast and the Furious. The sequels got steadily more boring until, around episode five, the crew realised that, whereas less may be more, much more is much, much more.

The trick was to combine the narrative logic of daytime soap opera with the physics of Road Runner. Characters die in one film and return sprightlier than ever in the next. Within the course of a single episode (this one, for example), Dominic Toretto (Vin Diesel) and Deckard Shaw VC (Jason Statham) can go from being the most deadly enemies to the most inseparable of friends.

No stunt is too crazy or extravagant for this barmy franchise. Episode Eight’s centrepiece sees evil Charize Theron send a mass of remote controlled cars about the streets of Manhattan. It’s completely stupid. It’s completely awesome. The last Fast and Furious film is the sixth highest grossing film of all time.

The Fate of the Furious (its title in the US alone, oddly) begins with a reminder of the series’ roots. Dominic and Letty (Michelle Rodruigez), now his wife, find themselves arguing with some hood on the streets of Havana. He says his Ford Koala can go faster than some other guy’s Dodge Pudenda.

“It doesn’t matter what’s under the hood. It matters who’s behind the wheel,” Dominic explains. Before you can say “pre-title sequence”, our hero is pushing the apparently inferior car to the point of immolation in a race that, by this franchise’s standards, plays like an intimate aside.

The calm does not last. An evil lady called Cipher (Theron) is in Cuba to lure Dom to the dark side. “Everyone is afraid of the hacker group Anonymous,” somebody explains painfully. “But even Anonymous won’t mess with her.”

At first Toretto shrugs Cipher off. But, a little later, he switches to her side in dramatic fashion. Newcomers will scratch their heads. Fast and Furious veterans have come to expect such apparent reversals. He’ll be all right in a moment.

The enormous collection of bald men who drive the cars – Statham, Diesel, Dwayne Johnson, Tyrese Gibson, others – know just how seriously to take the indigestible dialogue. Michelle Rodriguez is better still at the grunts and grimaces. Oddly, the two Oscar winners fare less well. Theron tries too hard to invest the lines with sincerity and ends up sounding like a decent big sister failing to grasp the point of her younger siblings’ dumb sandpit game.

In contrast, Helen Mirren is absurdly heightened as an East End moll who insists on finishing her “cuppa” before chewing fat with the desperate Toretto. The part might have made sense as a Batman villain during the Adam West era. But it’s too silly for Fast and Furious (yes, you read that right).

The series’ central premise does occasionally creak under the demands of the potentially apocalyptic plot. In the later stages, the team is required to storm a submarine base in an icebound corner of Siberia. Surely there are better ways of approaching such a challenge than climbing into a series of exotic sports cars. Might a helicopter not make more sense?

Elsewhere, the filmmakers exploit the deranged aesthetic to delicious effect. Keep eyes open for the moment when Dominic’s car is restrained on cables like the poor horse in The Misfits. This is just about the only point of comparison with the writing of Arthur Miller.

Enjoy. There will be many more to come.

The Simpsons: Hank Azaria quits as Apu after years of controversy
9