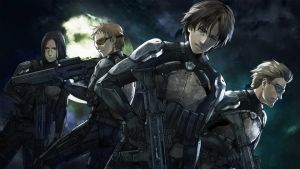 “The day New York’s Twin Towers were lost, something inside us changed,” says Genocidal Organ’s protagonist of his technologically connected and personally alienated 2022 world. “The scope of our freedoms shrank in order for us to fight terror.”

Six years after the explosion of a dirty nuclear bomb in Sarajevo, western democracies have written off personal privacy and transformed into surveillance states. Citizens are chipped and monitored: even buying pizza and Budweiser requires a biometric scan. Soldiers and military operatives are “emotionally optimised”; scanned and calibrated by their commanders, they are effectively drones who do not feel anything, either physically nor emotionally.

Elsewhere, developing nations are blighted by genocidal regimes, a bloody reminder, as one character puts it, that “freedom is currency and compromise”.

Intelligence agent Clavis Shepherd is duly dispatched to track a mysterious man known as John Paul around the globe. But how can one terrorist possibly be the architect of the fall of civilisation?

Deep in a philosophical conversation that touches on Kafka’s Amerika and The Castle, Lucia, John Paul’s former mistress, flags the Sapir-Whorf hypothesis. If language determines or influences thought, then might genocide have its own language, a grammar that can be deciphered and, perhaps, manipulated?

Following on from Empire of Corpses and Harmony, this is the third big-screen adaptation of Project Itoh’s work in as many years. The dystopian author, who died, aged 34, in 2009, was never more eerily prescient than he was with his 2006 novel Genocidal Organ. His predictions translate, sometimes imperfectly, into this dense but thought-provoking film.

“People are only interested in a fraction of the civil wars,” shrugs John Paul, in a gesture that is as grim and timely as the film around it.