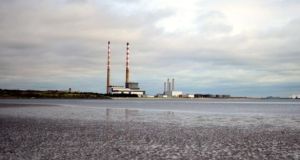 Dublin Port Company chief executive Eamonn O’Reilly has told Dublin City Council he “would have an open mind” on the development of a Hollywood-style film studio on the Poolbeg peninsula.

In recent weeks, Mr O’Reilly described the plans to develop an €80 million film studio on port lands as “daft” and “a good old-fashioned attempted land-grab”.

In a letter to The Irish Times last month he said port lands on the peninsula would be developed “exclusively for port uses”.

U2 singer Bono has advocated for the project and lobbied former minister for the environment Alan Kelly to support the studio. Actors Liam Neeson and Cillian Murphy have also spoken in support of the project.

About half of the land in the new development zone is taken up by the former Irish Glass bottle company and adjoining Fabrizia lands. The council has designated 80 per cent of these lands for apartments, with the remaining 20 per cent of this site earmarked for an office and retail “buffer zone” separating the housing from industrial land banks.

Almost all the remaining lands in the zone are port company-owned. Despite having previously ruled out the studio, Mr O’Reilly on Monday raised hopes that Hollywood could possibly still come to the city’s east end.

“In respect of the film studio we did meet the promoters on two occasions. We haven’t received any detailed proposals but we have responded, and you have seen the comments we have made,” he told city councillors.

“If we were to receive a detailed proposal as to what was involved we would have an open mind on it, but to date we haven’t and that is a really, really key point.”

The proposal had “come from left field in the last two weeks,” he said.

The port company is currently reviewing its master plan which will govern the development of port lands up to 2040 and will release a draft of the review for public consultation later this month.

This would be a “good opportunity” to deal with any proposal that might come in from any public sector body or private individual, Mr O’Reilly said.

However he reiterated that the port needed “every square inch” of lands in its ownership.

“We’d be as excited as everybody else to see a large film development in the city. The difficulty arises from our perspective in relation to the use of our lands. The real challenge is the growth we have, against the lands available to us.”

In a statement following the council meeting, Dublin Bay Studios said it had submitted a “detailed proposal” to the council.

“We remain very willing to work with all stakeholders to make this vision a reality for Dublin and Ireland.”

Todd Haynes: ‘All my movies are critical and financial disappointments initially’
10