The film is sly enough to function equally well as an old-fashioned shoot-‘em-up: or rather, shoot, if they’re lucky 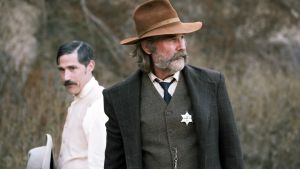 When two no-good, murderous highwaymen (Haig, Arquette) desecrate a Native American burial ground, the repercussions are quickly felt in the ironically named town of Bright Hope, where the forgetful ‘fraidy cat deputy sheriff (Jenkins) and the hilariously sardonic doctor’s assistant (Banshee’s Lili Simmons) are carried off into the night.

It falls to her hobbled husband (Patrick Wilson, soon subject to barbaric medical interventions and sweltering infections), the hard-nosed local sheriff (Russell, naturally) and a mercenary “injun”-hunter (Matthew Fox) to rescue them from their mute, people- eating kidnappers. It won’t be easy.

There comes a moment in S Craig Zahler’s thrilling horror-western when Kurt Russell’s Sheriff calls out to a screaming companion as he is butchered by Native American troglodyte cannibals. He winces as the “bunch of godless savages” hack away at parts nobody wants to see hacked.

Ultraviolence aside, there’s plenty to admire about this innovative genre-bender. Bone Tomahawk is a meta-fiction, replete with banter about “manifest destiny”, running commentary (“This is why frontier life is so difficult,” quips the kidnapped Simmons. “Not because of the Indians or the elements. But because of the idiots.”) and a commendably crazy closing ballad (Four Doomed Men Ride Out) co-written by the director.

The film is sly enough to function equally well as an old-fashioned Kurt Russell shoot-‘em-up: or rather, shoot, if they’re lucky. The western, as we’re reminded on a near monthly basis, hasn’t gone away you know: rather, it survives in arthouse aspic (as in Slow West, Meek’s Cutoff, Dead Man). By mashing John Ford and The Hills Have Eyes, Bone Tomahawk reminds us what the genre once was, a durable relic of frontier life that could swerve between the song and dance of Cat Ballou and the genocidal horrors of Soldier Blue.

At 132 minutes, there’s plenty of Bone Tomahawk, particular given the characteristically winning economy of its headlining star’s performance; that stately pacing serves as the calm before the storm. Read the credits: heroes all.