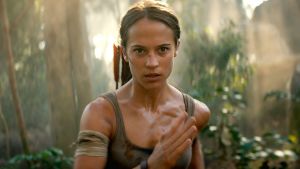 Alicia Vikander has worked hard on her abs, but she still looks far too wee and delicate to be a bad-ass Tomb Raider

Stand upwind, folks: the first unforgivable stinker of 2018 has landed with a big plop and an unlovely hiss. Ordinarily, video game movie adaptations this atrocious are sequels, but somehow this unwanted Tomb Raider reboot remarkably matches all the terribleness of Silent Hill: Revelation 3D, Mortal Kombat: Annihilation, and Streetfighter: The Legend of Chun-Li without a first instalment.

One can only assume this is Alicia Vikander’s anniversary gift to Michael Fassbender, so that he can feel a bit better about the underwhelming Assassin’s Creed.

The Oscar-winner is hopelessly miscast as Lara Croft. Let me count the ways. She doesn’t sound English, let alone the fake, plummy English that her predecessor Angelina Jolie perfected with her tongue firmly in her cheek.

She’s worked hard on her abs, but she still looks far too wee and delicate to be a bad-ass. She may be as beautiful and capable as Jolie, but she has none of the latter’s A-list qualities, the je ne c’est quoi required to keep the Brad-Ang-Jen triangle splashed across the tabloids, or more pertinently, to carry a silly film like Tomb Raider.

We say silly. But the problem with this movie is the absence of levity, joy or camp. There are moments when you wonder if the entire cast is auditioning for a Eugene O’Neill play.

This new po-faced Lara Croft has serious daddy issues, an Oedipal complex that to leads her to one of “at least 6,000 islands off the coast of Japan”, in search of something called Himiko’s Tomb and her absent father.

With Daniel Wu (wasted) in tow, she stumbles onto an illegal mining operation run by Walton Goggins (also wasted) and a crypt of plastic-looking skeletons (also wasted).

Mostly, Lara falls, then clings on to something, then falls again. We’re more than 90 minutes and a good deal of world-building guff in before Tomb Raider gets around to actual tomb raiding.

At best, the new Croftian innovations – no guns, no shooting, no va-va-voom – are ill-advised. At worst, they’re ghastly attempts to get down with the kids.

Watch out for the itsy-bitsy early scene that allows the film to squeak the Bechdel Test. So empowering. And look, this Lara does MMA training! And she works as a bike courier! Because the kids just love that Conor McGregor and zero-hour contracts, right?

Norwegian director Roar Uthaug (The Wave) can choreograph a decent chase scene, but the flashes of action can’t compensate for the tedium between.

Oh, Lara Croft Tomb Raider: The Cradle of Life! We didn’t know what we had!