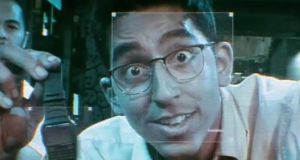 Dev Patel as a brainbox scientist in Chappie

I sit down with Dev Patel just as he starts into his second pot of green tea, which only serves to heighten his manic energy levels. Add a scruffy beard, grown for his role as the mathematician Srinivasa Ramanujan in The Man Who Knew Infinity (next year’s The Theory of Everything) and Patel is not unlike an itchy- footed backpacker who can’t wait to get back on the road.

Patel’s mother, a caregiver, twigged early on that her son needed an outlet. So she steered the young and restless Dev towards drama and Taekwon-do. He excelled at both; by 16 he had a first dan black belt and took home a bronze medal from the 2004 Action International Martial Arts Association World Championships in Dublin.

“It was great for me,” he says. “During school hours I was quite a terror – not a terror, really, I wasn’t getting in fights or anything, but quite a cheeky lad. As soon as I stepped into a martial arts class, I was a different person. I had responsibility. I was the youngest black belt in my academy. That instilled a lot of good qualities in me.”

Shortly after Patel received an A* in GCSE drama for his “self-penned portrayal of a child in the Beslan school siege”, his mum spotted an ad for an open casting call. That audition brought him into TV’s Skins, as a conflicted Pakistani teenager.

For any other actor, it would have been a big break, but there was bigger to come. By early 2007, director Danny Boyle had seen hundreds of young Bollywood stars in his search for the lead in Slumdog Millionaire. Boyle’s teenage daughter, a Skins fan, pointed dad toward Dev Patel. Within months, the youngster was at the Oscars with co-star- turned-girlfriend Freida Pinto on his arm. (The couple recently split after six years together.)

Was he worried that might be a hard moment to top? “No. Not really,” he says. “I was too busy being me. It didn’t feel like a quick progression, because by the time we shot Slumdog I had, like, six auditions. For me the entire process took ages. But what the world sees is ‘Whoa, who is this guy? There’s a new Indian dude actor on the block’.”

His career has been more hit than miss since Slumdog. Sure, The Last Airbender received a critical kicking before crawling its way into profit, but The Best Exotic Marigold Hotel was a genuine surprise hit and the film that would launch the “grey pound” subgenre.

“For it to find as big a market as it did just shows that people of all ages love movies,” he says. “So why didn’t we realise that before? I was so glad to help tell that story. My mum works in a care home and she took a group to see it and they just loved it. I have friends that got dragged along with their parents and loved it. There’s something really nice about seeing Judi Dench by the pool.”

And then there’s the day job. For most of the past three years, Patel have been tied to LA for the shooting of the HBO media drama The Newsroom, which ran for three series.

“Newsroom was always intense,” he says. “The material is Aaron Sorkin, so the verbal load – that sounds so wrong, but you know what I mean – was incredible. We were constantly spewing information. And everyone is talking and it’s so perfectly orchestrated, and it’s exhausting.

“So I think three years was a really good run. It’s about as much as I could manage before I collapsed. I was always the guy at the read-through feeling stupid.”

This looks set to be a big year for Patel. In addition to the current The Second Best Exotic Marigold Hotel and the incoming Stalin-era thriller Child 44, there is the small matter of Chappie, the third film from District 9 director Neill Blomkamp. It’s an original sci-fi film starring Patel, Hugh Jackman and Sigourney Weaver.

“The irony is I’m a bit of the technophobe, so this is probably the best acting I’ve ever done,” says Patel.

But doesn’t your dad work in IT? “He works for an IT company, but he’s an accountant. I have no patience for any kind of technology. But I did love working with the great Sharlto Copley in a grey spandex suit as Chappie. If it had been a real robot, I couldn’t have managed. ”

Interestingly, Patel explains his work as he goes along: “When I did a film called Slumdog Millionaire . . . ” or “When I was in a TV show called The Newsroom . . . ” He is unlikely to be confused with an ego-maniac; he spends his free time walking friends’ dogs or shooting pool. He’s still awestruck by the idea that he makes movies.

“I’m still like a child on set. I love talking to everyone. I’m never ever in my trailer. I still love craft service and eating for free. Whoa, free food.”