Director Julia Ducournau’s feminist-cannibal horror-comedy ‘Raw’ made audience members faint in Toronto, but it's more than a horror movie; it’s a crossover movie 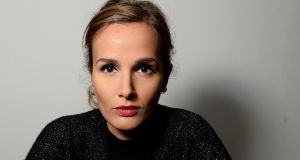 Julia Ducournau: “When I was growing up I heard [my doctor parents] talking about diseases and I would picture them and fantasise about them.” Photograph: Jeff Spicer/Getty

Move over, creepy pasta and found footage; there’s a dapper new kind of art-horror about town. A sub-genre that once looked to have peaked around 1977 – the year when Eraserhead and Suspiria triggered brand new nightmares – has been steadily gaining traction since the turn of the millennium.

And now it has slunk its way into a multiplex near you. Clipping at the heels of Get Out, Jordan Peele’s cunning race-relations horror-satire, comes Raw, Julia Ducournau’s witty, gruesome, cannibal veterinarian horror-comedy.

“I’m not a sociologist, so I can probably only give you stupid reasons,” says the Parisian film-maker, laughing. “But I think it has something to do with the general state of the world right now and the dark days that we are going through. Because genre horror films are often associated with violence and anger, they are useful for the younger generation – to which I belong – as a way to express larger fears effectively.”

Get Out has received near-universal acclaim among critics and crowds, who have jollied the film – made for $4.5 million – toward $154,410,610 at the box office thus far. Raw has gone one better, having made headlines when it picked up the Fipresci Prize. awarded by international critics, at Cannes last year.

That’s a remarkable feat when one considers how rare it is to happen upon a French horror film. There’s a strange contradiction at work here: Cahiers du Cinéma named John Carpenter’s horror-sci-fi Ghosts of Mars as the fourth best film of 2000 at a time when the same film received very little love from anglophone critics, yet French state funding favours arthouse over genre.

“Nowadays, of course, we recognise people like [David] Cronenberg and Carpenter and Wes Craven, ” says Ducournau, a witty, prepossessing 33-year-old, who’s previous 2011 short Junior – another Cannes winner – also concerned bodily metamorphosis. “But a lot of that recognition has happened in the light of history. I don’t know why genre cinema is not taken very seriously in France. I think something got lost in time, because before even the New Wave, we had directors like Henri-Georges Clouzot. Even when you think about directors like [Jean-Pierre] Melville, they worked in film noir, they worked in genre. So we’ve lost that.”

Ducornau and producer Jean de Forêts were pleasantly surprised when the French funding quickly came together for Raw.

“Making movies is never easy,” she says. “It requires a lot of perseverence. But we really expected to struggle way, way more to get funding than we did, because of the identity of my movie. It’s not only a horror movie; it’s a crossover movie – something very hard to sell, especially in a culture that doesn’t make horror movies and where women directors are still a minority.”

You may be struggling with your own little problems but some day your body will say ‘f**k off’, and then you die

Last September, during the film’s Toronto International Film Festival premiere, audience members fainted, paramedics were called, and at least one person was carried away of a stretcher. Ducornau, the daughter of two doctors, is not one for flinching.

“I didn’t realise my parents had influenced my work until very very late,” she says. “But work so far has featured a lot of bodies and the mutation of bodies. When I was growing up I heard them talking about diseases and I would picture them and fantasise about them.

"And I probably imagined them as worse than they actually were. I think also, if you have family or friends who are doctors, they have a very practical point of view about illness and mortality. Whatever. You are going to die of something anyway. You may be struggling with your own little problems but some day your body will say ‘f**k off’, and then you die.”

Raw concerns a straight-edge, virginal vegetarian named Justine (Garance Marillier), who, following in the footsteps of her parents and her wilder older sister, begins her studies in veterinarian medicine with a burst of hazing torments and hedonistic parties. During these cruel initiations, Justine is forced to eat rabbit kidney, an act that leaves her with an insatiable craving for meat. Including finger food. Made from real fingers.

“Everybody wants to talk about the bodies and the cannibalism,” says the director. “But, for me, the core of the film is the relationship between the sisters. They are separating for the first time in their lives. When I was creating the dynamic between them, I imagined a cell that was dividing”.

Never mind the compound carnalities of Justine’s campus life, the gothic-looking veterinarian equipment and the spectacle of a horse being put to sleep ahead of a surgical procedure was, for this viewer, far more disconcerting than the menu items.

“Me too,” says Ducornau. “You’re watching a real intervention. The horse is being put to sleep for a real procedure. I’m from the city, so when I see a horse I imagine it running in the fields with the wind in its hair. There was something so tragic and sad about seeing such a big beast in such a small room.”