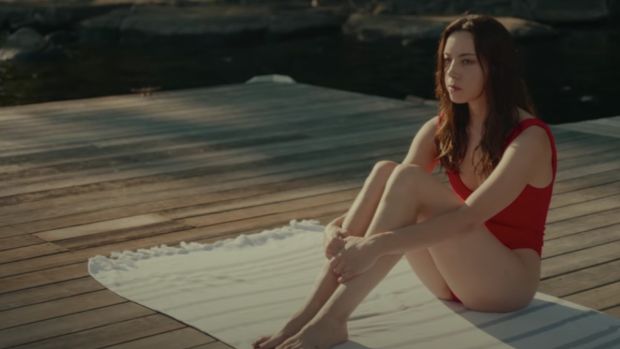 Allison (Aubrey Plaza), sits on a dock looking over a misty lake. She walks to a cabin and looks at a notepad. Should we consider everything that follows as a scribbled fiction? It’s the first of many teasing metatextual hints and layers in this tricksy, surreal cringe comedy, a film that falls somewhere between Fawlty Towers and Mulholland Drive.

An opening section, intriguingly titled The Bear in the Road, introduces Plaza’s actor-turned-director as she retreats to a remote guest house in the Adirondack mountains to wait “for something meaningful to happen to me.” What follows is certainly meaningful, albeit squirm-inducing.

The house belongs to Gabe (Christopher Abbott) and his heavily pregnant partner Blair (Sarah Gadon). As the evening wears on, Gabe chides Blair for drinking a glass of wine and she makes remarks about his stalled music career. The discomfort of listening in on their marital strife is exacerbated by alcohol consumption and Gabe’s apparent interest in Allison.

No good can come of the situation, but processing what unfolds will have to wait until after the film flips entirely and enters part two: The Bear by the Boat House. Suddenly we’re on a film set. Gabe is the director and Allison and Blair are actors.

And that’s not the only new development. If you hadn’t realised by now that Gadon and Abbott are the most unmissable actors around, Black Bear will seal the deal. But it’s Plaza’s turn in a script that demands she “... break down and give the best performance that anyone has ever seen ever” – yes, that’s the script direction – that pounces like the ursus of the title.

The bear appears without making plain its meaning. Is it the monstrous toll of art, not for the practitioner but for those around him or her? Is it the cannibalisation of life by art? The something meaningful that Allison anticipates may be sexual or personal or creative or perhaps, necessarily, a strange chimera of all of the above.

Lawrence Michael Levine’s blisteringly original, provocative, often hilarious screenplay lurches between familiar tropes – “I saw the way you were looking at her!” – and jagged edges. It’ll keep you guessing long after the credits roll.

Available to stream on digital platforms from April 23rd