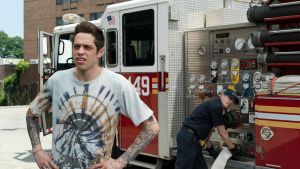 Pete Davidson and Steve Buscemi in The King of Staten Island

Over the past decade and a half, Judd Apatow, once cupholder for Larry Sanders, has developed a near-pathological resistance to narrative economy. The two-hour marker was no longer visible in the rear-view mirror by the time This is 40 and Funny People spluttered to a welcome halt. Trainwreck clocked up a mere 125 minutes, but the audience felt every one of them.

Pete Davidson, among Saturday Night Live’s more divisive yellers, can, thus, have expected little trimming of fat when Apatow took up his loosely packed, autobiographical script. So it has proved. Just six minutes shorter than 2001: A Space Odyssey, the picture never takes a straight line when a lengthy meander is available.

It would be unfair to say nothing happens. Aware of American cinema’s perennial duty to drone on about fatherhood, The King of Staten Island follows Scott (Davidson), a young tearaway from the titular locale, as he seeks to engage with emotional baggage left by a firefighter dad who died in the course of duty. His long-suffering mom (Marisa Tomei making her charming best of a rough-tongued saint) dates a former colleague of pop’s (Bill Burr) and sends junior into a mess of jealous confusion.

Somewhere into the fifth day of the running time, Scott finds himself bonding with mom’s boyfriend and gaining belated perspective. Maybe he can finally admit that he’s in love with misused Kelsey (Bel Powley). Maybe he can fulfil ambitions to become a professional tattooist. It’s a neat operetta of redemption relayed at the pace of Wagnerian tragedy.

Yet the thing has undoubted zest. The awareness that Pete’s dad died in the World Trade Center (a detail wisely altered to an everyday hotel fire here) surely bolstered Apatow’s habitual reluctance to cut. It’s a labour of love. But the director may also reasonably have believed that the bagginess is an inextricable part of the aesthetic.

Davidson is attempting both a teasing out of his own history and a fantasia on New York’s least celebrated borough. “We’re the only place that New Jersey looks down on. You can see the garbage dump from space,” Scott says. Robert Elswit’s camera finds rough beauty in the bland facades, ill-lit dive bars and scrubby beachfronts.

The film eventually (assume that last word sits within every sentence of this review) works a similar unlikely magic on Pete Davidson. Like his home territory, he develops a shabby amiability that would be less at home in a more well-ordered film.

This argument can’t excuse all of the many careless plot terms. A central diversion into criminal territory belongs in a less light-hearted film. Scott’s grand sentimental gesture at the close would test the gag-reflexes of a hummel figurine. But there are pleasures here for the tolerant viewer.

Available to stream on major providers from June 12th