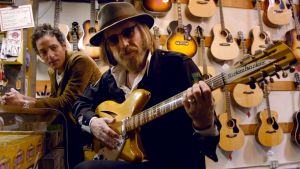 Film Title: Echo in the Canyon

A great many people will use the word “essential” when discussing this documentary on the music that emerged from Laurel Canyon in the 1960s. Fair enough. Time is creeping on and the figures who appear in such films – Roger McGuinn, David Crosby, Brian Wilson – are no longer so spritely as they once were.

A final interview with Tom Petty is reason enough to stream Echo in the Canyon. There is some nice archive footage. There are many good stories. So, yes, it is essential in the limited sense that no fan will let it pass by unwatched.

There is, however, some desperately bland film-making on display here (punks still stubbornly unconvinced by the finger-plucked sounds of Crosby, Stills, Nash and Young may think that style appropriate). Though directed by Andrew Slater, Echo in the Canyon looks very much like a vanity project for Jakob Dylan. The worst part of these things is always the new work and I regret to say that Slater builds the film around a tribute concert that Dylan Minor curated in 2015.

Not all this material is bad. Fiona Apple’s version of the Beach Boys’ In My Room makes good use of her creative anguish. But Jakob’s version of Monday Monday is almost drab enough to appear on his father’s album Self Portrait.

The meat of the film is the roving interviews between Jakob and those still-upright former denizens of the thin strip north of Hollywood who, for good or ill, helped create folk-rock in the groovy times. The juxtaposition of Jakob and these veterans is disconcerting – as if a youngish Bob had emerged from a time machine to talk to his pals in their senior years.

McGuinn is always the least interesting person in such documentaries and, acoustic guitar propped on knee, he proves, yet again, to be the lukewarm water to David Crosby’s fire. Michelle Phillips tells the story about Brian Wilson in his sandpit for the millionth time. Wilson again confirms that Rubber Soul inspired Pet Sounds. It’s as if a hundred back issues of Mojo came to life and made a film of themselves.

All this would be forgivable were it not for one glaring omission. We can excuse the absence of The Doors by arguing that their music went down a different road. But not even mentioning Joni Mitchell in a doc on Laurel Canyon is akin to making a film on the Mersey scene and not crediting The Beatles. Heck, it’s like not mentioning Liverpool itself.

Streaming on Apple and other sites from June 5th