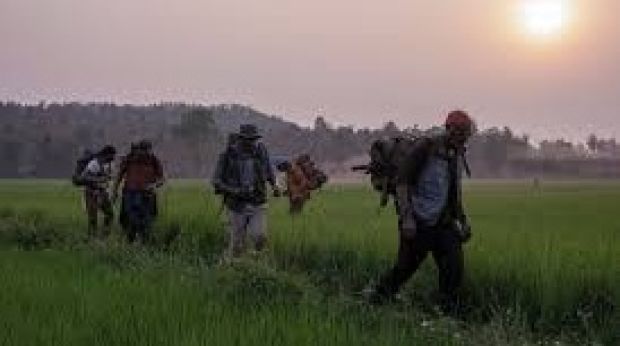 This Vietnam War inspired drama concerns a tontine, that is, an unlikely stash of gold discovered by the five young soldiers of the title.

There are four credited screenwriters on Da 5 Bloods – including BlacKKKlansman co-writer Kevin Willmott and Rocketeer scribes Danny Bilson and Paul De Meo – and very little evidence that they were working on the same script.    The 23rd film – give or take a few major non-narrative projects – from Brooklyn’s most admired auteur is an intriguing, saggy, maddening movie. Borrowing a silly old plot device from The Simpsons – or possibly M*A*S*H – this Vietnam War inspired drama concerns a tontine, that is, an unlikely stash of gold discovered by the five young soldiers of the title.

Decades later, they return to the jungle, to bring home the remains of a fallen comrade (Chadwick Boseman), and to dig up the treasure.

The bickering veterans, which occasionally resemble a barbershop scene featuring Eddie Murphy as all the characters, are dominated by the increasingly unhinged Paul (a magnificent Delroy Lindo, channelling King Lear) and his long-suffering son, David (The Last Black Man in San Francisco’s Jonathan Majors).

Shots of pretty scenery and emotional stand-offs sit uneasily alongside the implausible pot-of-gold adventure. Set-pieces, including a falling snake and an unexploded device are unexpectedly clumsy. The tone swerves messily. The run-time is absurdly long. The ages of several cast members are baffling.     Spike, nonetheless, manages to mine a compelling parallel political narrative using archival footage and inserts.

The film opens with Muhammad Ali speaking in 1978 (“My conscience won’t let me go shoot my brother or some darker people or some poor, hungry people in the mud”) and closes with Martin Luther King quoting Langston Hughes: “America was never America to me and yet I swear: America will be,” precisely a year before his assassination.    A coda featuring Black Lives Matter proves irresistible and too, too timely.

Out on Netflix June 12th