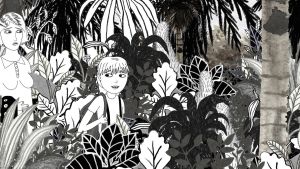 A breezy, heartfelt coming-of-age tale set in middle-class Ecuador and Colombia, Virus Tropical starts at the very beginning of the artist’s life, hovering through a bedroom in Quito in 1976, where her parents have noisy sex and a spermatozoa sets sail on an implausible journey.

We say implausible; Paola’s mother had her tubes tied a year earlier, leading to a series of medical appointments wherein she is diagnosed with such random ailments as Satanic interference and ‘virus tropical’, all the while sporting a comically large bump.   Paola is born into an eccentric well-to-do family. Her father, Uriel, is a former priest who ultimately abandons his wife and three daughters to return to his mother in Medellin. Her mother is a psychic who reads fortunes using dominoes. As the youngest sister, Paola is doted upon by her eldest sibling, Claudia, and envied by usurped middle sister, Patty, a dynamic that flips after Claudia enters adolescence.

Thus begins a series of wars with the family matriarch and a longer series of upheavals.   When Patty relocates to Columbia for university, Paola and her mother follow. Claudia’s marriage to an apparently worthless suitor brings her to the Galapagos Islands. As Paola grows up, there are drugs and shootouts and dodgy nightclubs ruled out of bounds, yet these more dramatic aspects of Columbian life are played down in favour of the wondrous everyday.

Paola lightly dramatises the making of a girl as her dramatised self recreates romantic scenes from telenovelas with Barbies and then the boy-next-door, gets her first period, dumps a first boyfriend, a second boyfriend, and, then, with commendable nonchalance and minimum fuss, loses her virginity.    The artist’s elaborate, gorgeous black-and-white line drawings and diaristic dialogue are painstakingly transferred to the screen by the animator Santiago Caicedo. Adriana Garcia Galán’s pleasing score threatens to make pan-pipes cool. The voice cast are as terrific as the material.

On Mubi from June 11th