Reissue of the Week: Boyz N the Hood – Still vital viewing after 25 years 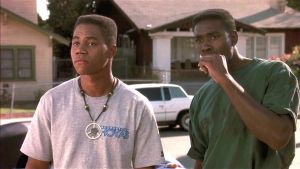 When Tre Styles (Desi Arnez Hines II, and later Cuba Gooding Jr) gets in a fight at school, his divorced mother (Angela Bassett) sends him to live with his father, Furious (Laurence Fishburne), in South Los Angeles.

Tre soon finds companionship with the titular boyz, including Doughboy (Ice Cube), who grows up to be a Crip; Chris, another Crip, who is confined to a wheelchair after a gunshot wound; and Ricky (Morris Chestnut), a star football player with a chance of a college scholarship. In common with most teenage boys in coming-of-age dramas, Tre hopes to get some from his chaste girlfriend Brandi (Nia Long).

There is constant friction in the ’hood as tensions rise between Crips and Bloods, but there is seldom friction at home, where Fishburne’s patriarch philosophises and chills – think Morpheus without the goth coat.

John Singleton was just 23 when wrote and directed the era-defining Boyz N the Hood (1991), a film that would bring him to Cannes and the Academy Awards, where he became the youngest ever nominee – and the first African-American – to be shortlisted for best director. It might have just been another decent pop movie, occupying the same space that Quadrophenia does for Mods. Instead, it is a clever, multifaceted thing.

Restored and reissued to mark its 25th anniversary, Boyz’ nimbleness ensures that it has aged well. A gangsta rap aria, this remarkable bildungsroman lured viewers with the promise of urban warfare, only to plead with them to “increase the peace”. Police brutality is acknowledged but the perpetrator is a sadistic black officer.

Parenting, in particular, fatherhood, is lionised and mythologised. “Any fool with a dick can make a baby,” offers Furious, “but only a real man can raise his children.” (Paul Beatty’s superb Man Booker Prize winner The Sellout offers a comical inversion of Singleton’s worshipful depiction of paternity.)

Startling violence
In an entertainingly verbose film, composed of yarn-telling, trash-talking and wise words, the sudden outbursts of violence are calibrated to startle. Singleton’s desire for realism meant he was not above firing a round if it kept the cast on its toes.

Famously, Boyz N the Hood is bookended by references to Stand by Me. Scratch below the gunplay and the music, both films share much DNA, which may explain the film’s colour-blind appeal. It’s just that no one had an AK in Stand by Me.

In 2002, the US Library of Congress deemed the film “culturally, historically, or aesthetically significant” and selected it for preservation in the National Film Registry. But that’s arguably less flattering than Kevin Hart later appropriating the plot as a cover story for Will Ferrell in Get Hard.

Patrick Freyne: The Late Late Toy Show is coming, there’s no need to be afraid
8