Extremely Wicked, Shockingly Evil and Vile: Well, it’s not quite as bad as that 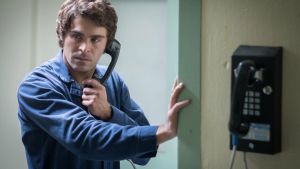 The makers of any film about Ted Bundy, the psychopath who murdered at least 30 American women in the mid-1970s, will first need to persuade viewers that the work is in at least reasonable taste. (“Good taste” is out of reach here.) Anybody who has seen the appalling, breathless TV trailer for Extremely Wicked, Shockingly Evil and Vile will be already suspicious.

On those limited grounds the film’s director, Joe Berlinger, whose documentary on Bundy, Conversations with a Killer, is already available, succeeds with some room to spare. The picture shows little violence, limits the most gory descriptions and holds its one, gruesome image back for an effective final scene.

Based on a memoir by Elizabeth Kloepfer, Bundy’s fiancee, Shockingly Evil is properly focused on the women he betrayed and deceived. The casting of Zac Efron as the famously handsome Bundy has a whiff of stunt about it.

The film is not nearly so imaginative – or speculative, to be fair – as the recent My Friend Dahmer. There are few revelations not already known to students of Bundy’s appalling campaign. What we have is an efficient, well-acted walk through his first arrest, the broader investigation and his eventual conviction.

Michael Werwie’s script does, however, do a good job of conveying how such a psychopath can appear as an entirely different human to the people who meet him in everyday environments. If the film is to be believed, Kloepfer, played with nervous conviction by Lily Collins, caught no behavioural intimations of the killer within.

Efron has always been excellent as the most charming man in the room, and, very wisely, he allows few winks or nudges into his performance. Bundy got as far as he did partly because he really did come across as an Efron type.

We are reminded that this was the first televised trial in the United States, and John Malkovich’s turn as the grandstanding judge highlights the downsides of that practice. (The unfortunate title is drawn from his summing-up.) But there is no great innovation to the treatment of that or any other story.

One is tempted to say the picture feels like high-end telly – and you can watch it on Sky Cinema from Friday, the day of its theatrical release – but David Fincher’s near-contemporary, hugely superior Mindhunter is right there.

Opens on Friday, May 3rd

Geena Davis: ‘I was, like, Hot dog! I’m in something that started change’
6 Unanswered questions about Sheedy case cannot be buried a second time
7