The Dig: A classic western movie set on an Irish bog

Review: An impressive oddity with Moe Dunford and Lorcan Cranitch that deserves renown 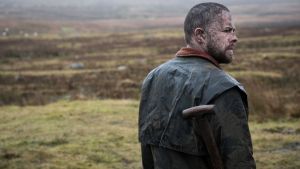 The Dig: An Ulster western, starring Moe Dunford and a lot of piles of earth, which does less to argue for the joys of the countryside than did Cold Comfort Farm

Andy and Ryan Tohill, directors of this much-acclaimed Northern Irish feature, leave us in little doubt that – despite setting the action near a border that offers no vistas of the Rio Grande – they are working within the traditions of the western.

The local barman pours whiskey straight from the bottle into a shot glass. Law enforcement is in the hands of just one man who, when challenged, lifts his shirt to reveal a pistol in a side-holster. Moe Dunford does what Moe Dunford has to do.

This being an Ulster western, the searchers (unlike those in The Searchers) stay in pretty much one place and pursue their hunt through a Sisyphean process that, involving piles of earth, would suit the characters in a Samuel Beckett play.

Following a spell in jail for his involvement in the killing of a young woman, Ronan Callahan (Dunford) rides into town to encounter the near-complete hostility of those who’ve failed to put lives back together. Always at his best when distressed and unreasonable, Lorcan Cranitch brings cyclonic misery to the character of Sean McKenna, the victim’s brother.

We soon learn that, drunk at the time of the killing, Ronan was unable to provide the police with the location of the body. Assuming it is somewhere in the neighbouring bog, Sean has set to digging holes along a rigorously plotted grid. When Ronan looks out he sees a series of flags noting the positions of unsuccessful excavations. It might be the view from the window in Endgame (no, not the Avengers film).

Angus Mitchell, an experienced cinematographer from TV, brings oppressive greyness to a project that, covering everything with foul mud, does less to argue for the joys of the countryside than did Cold Comfort Farm.

The interplay between Ronan, Sean and Murphy (Francis Magee), a brutal police officer – the temptation to say “sheriff” is overwhelming – becomes ever more tense as the protagonist trawls through half-memories for clues as to his own actions. The narrative bends around Sean’s eventually slight softening to Ronan and both actors do good work in making that relationship plausible. Cranitch is a man possessed. Dunford gets the trauma of a man unsure of his own culpability.

Not everything works. Emily Taaffe does her admirable best with a character who makes less sense as the movie broods on. The ending is closer to Inspector Morse than seems wise after so much existential moping. But this is an impressive oddity that deserves its renown.