Rose McGowan in Dublin: ‘Hollywood was a pile of sexist bullshit’ 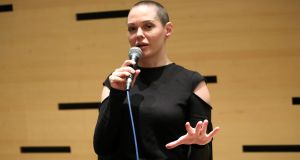 For the last year and a half, much of the discourse around Rose McGowan has tended to revolve around Harvey Weinstein.

In October 2017, the actor and film-maker publicly accused the now disgraced Hollywood producer of sexually assaulting her at the 1997 Sundance Film Festival. She later detailed the assault in her memoir Brave, referring to him only as “the Monster”.

Since then, McGowan has become one of the most prominent figures in the #MeToo movement. Last night, she was interviewed at the National Concert Hall by the journalist Sam Baker as part of the venue’s Words+Ideas series. And for once, Harvey Weinstein didn’t garner a mention.

“We are not going to talk about him because he doesn’t deserve the airtime,” said Baker, refusing to even utter his name.

Instead, McGowan herself was the focus of the interview. Over the course of the evening, she read excerpts from her memoir and spoke about everything from her turbulent upbringing in the religious cult Children of God to navigating Hollywood as a young actress. Perhaps unsurprisingly, she now views Hollywood as its own sort of cult.

“Hollywood was a pile of sexist bullshit,” she said, before outlining various examples of sexism she had experienced over the years. There was the time she received a casting note for an Adam Sandler film in which she was advised to wear a push-up bra and leggings. Or the time she arrived to a photo shoot for Rolling Stone and was asked to pose wearing a belt of bullets and nothing else.

“My eyes are just vacant in that photo,” she said, recalling the cover shoot.

Hollywood, she said, has been dominated by the male gaze and this has informed how women have been represented on screen and elsewhere.

“There’s nothing wrong with the male point of view,” she said. “It’s just when it’s the only one that it becomes a problem.”

Not only did the male-centred outlook inform how she was portrayed on screen, but it dictated how she was perceived off screen. For much of her career, McGowan was pigeonholed as a muse. Recently, however, she has discovered her own voice as an artist. Over the last few years, she has recorded an album, directed a short film, and dabbled in photography.

“I was like, I’m not a muse. I’m the goddamn artist. That was a very powerful thing to figure out.”

While McGowan is often portrayed as a righteous warrior, she was afforded the opportunity to show off another side to her personality last night. “You’re much more jolly than your persona,” observed Sam Baker.

“True,” replied McGowan. “Even the picture that I think was used to promote this talk... I look like a right bitch in that picture. That probably scared half the audience away.”

Nonetheless, she owned her rage, noting society’s discomfort with the notion of angry women.

“I think anger is something that is so forbidden – especially for women,” she said.

All in all, it was a relatively subdued evening. The conversation, though engaging, rarely veered off-script or threw up any surprises. From encouraging the audience to ruffle feathers to delivering a message of solidarity to survivors of sexual assault, McGowan stayed on message and avoided causing any controversy. At the end of the evening, she received a standing ovation from the audience. And who could begrudge her?

“It’s been a hard couple of years,” she told them. “There were some times in the last year and a half that I didn’t feel like I was going to survive it, to tell you the truth. But I’m here and I’m with you and I’m happy.”