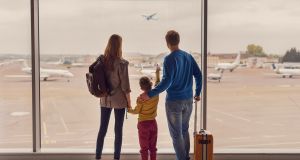 To assist those looking to buy a home, Indecon says that returning emigrants who have paid Irish tax in the last 14 or 15 years should be entitled to the Government’s Help to Buy scheme for first-time buyers.

New legislation should be considered to remove discriminatory pricing by motor insurance companies on Irish emigrants who face costly premiums after returning home to live, a new report recommends.

Economic consultants Indecon say the Government should explore the feasibility of reserving a small percentage of school places every year for returning emigrants who are disadvantaged by not having applied years in advance.

Returning emigrants should also be eligible to apply for the Government’s Help to Buy scheme for first-time home buyers and exempted from mandatory driving tests to help their move home.

The 139-page report was commissioned by Minister of State for the Diaspora Ciarán Cannon to set out ways of removing barriers to returning emigrants.

The Government is advised to consider a means-tested third-level grant for children of long-term Irish residents, including children of Irish emigrants, to avoid higher non-EU tuition fees.

New processes are recommended to recognise foreign professional qualifications or training in areas such as construction, nursing, policing and teaching to help returning emigrants find work at home.

Indecon makes 30 recommendations that could make the repatriation for emigrants easier, including removing the waiting period imposed by health insurers for previously diagnosed health problems and developing an overseas visa application process for non-Irish spouses and partners of returning Irish emigrants.

The economic recovery has encouraged more and more emigrants to return home, but barriers at home have made the move difficult for many returning emigrants, prompting Mr Cannon to commission the report.

The report says that to assist emigrants who wish to return home, it is “essential” that they are supported “to overcome any unnecessary administrative or other barriers.”

“It is also important that the needs of Irish migrants who have returned are supported to ensure they are reintegrated into Irish society and are made to feel welcome,” the consultants say.

The Indecon study says that 26,428 people in 2016 had lived abroad a year earlier. In a survey of the worst problems affecting their return home, emigrants listed housing (43.4 per cent), motor (41.4 per cent) and finance and banking (16.3 per cent) as “very difficult” in the most challenging areas on their return.

The consultants say in the report the barriers to returning emigrants “reflect unintended consequences of legitimate policy objectives” and that there is a need “for specific adjustments” to tackle these problems.

The Department of the Taoiseach should create a dedicated website for overseas emigrants considering a move home as part of the Government’s new Ireland. ie initiative, it says, and this website should be branded “Returning to Ireland.”

Many recommendations urge State departments and agencies to provide better information to returning emigrants on finding places to live, applying for mortgages, and securing employment and insurance.

The Government is advised to make greater use of technology to help returning emigrants apply for personal public service (PPS) numbers to help find work, secure permission for a spouse or partner to remain in Ireland and to apply for a State pension.

The consultants say that the Government could provide more information on the process and requirements for seeking mortgage approval to buy homes on their return and to improve procedures for housing vulnerable emigrants who are returning from overseas.

Emigrants should be better informed that they can set up online bank accounts from overseas, that an overseas savings record can stand as proof to qualify for a mortgage and that they can make voluntary social welfare contributions to protect their State pension at home while living abroad.

Indecon says that the 12 mandatory essential driver training (EDT) lessons were “a critical barrier” for returning emigrants and that they should be waived for experienced drivers who have previously had a full Irish driving licence or EU equivalent, or can show a two-year current full driving licence from another country.

The Government should also expand bilateral driver licence exchange programmes with a particular focus on key countries where the Irish traditionally emigrate to. There should also be improved procedures to allow the Irish living overseas to renew their Irish driving licences online.

To help emigrants secure motor insurance, Indecon recommends that the Government highlight companies who accept and offer no-claims discounts to returning emigrants on the dedicated website.

To assist those looking to buy a home, Indecon says that returning emigrants who have paid Irish tax in the last 14 or 15 years should be entitled to the Government’s Help to Buy scheme for first-time buyers.

The scheme currently excludes people who have lived abroad for more than four years.

“This would enable first-time buyers returning to Ireland, to part-fund the deposit on the purchase of a house,” the report says. “This would also be very important symbolically, in highlighting to returning emigrants that they are welcome back, and the measure would be justified on equity grounds.”

In the area of education, Indecon recommends that the means-tested grant system for first-time third-level education should apply only in cases where parents are Irish or EU citizens, have lived in Ireland for 15 years or more, and who would have financial difficulties in funding their children’s university education in Ireland.

The Government should also consider a wider eligibility for EU college and university fees for the children of Irish emigrants, though EU rules mean the implications of this require further analysis.

Indecon says that if this option was not feasible, the existing Government of Ireland International Educational Scholarships could be expanded to assist children of Irish emigrants who are not eligible for EU fees.

There should be increased flexibility for the EU fees on postgraduate courses, while applicants for medical internships who have enrolled in medical school through the Central Applications Office (CAO) should not have a priority over the children of returning emigrants who have applied through other systems.

Further information on and investment in overseas jobs fairs and support from State agencies such as IDA Ireland and Enterprise Ireland should be provided to attract the Irish living overseas back. This would enhance skills and experience in sector where employment demand is high and to establish businesses.

“Emigration is increasingly seen as temporary rather than permanent for many, albeit not all emigrants, and it is no longer uncommon for people to leave and return to Ireland, even to do so a number of times,” the report says.