Alan Parker on The Commitments: ‘I never met an Irish person who didn’t like it’

The director on making The Commitments, keeping tabs on the cast and breaking the record for swearwords in a film 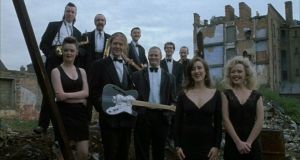 The cast of The Commitments: “We gave them all mobiles – a novelty in 1990 – so we could keep tabs on them.”

I was offered a chance to film Les Misérables in the late 80s, but I chose The Commitments instead. After making several films in America, I had a yearning to do something closer to home and to my working-class roots. Dublin’s northside, where Roddy Doyle ’s novel was set, closely resembled the Islington of the 1960s where I grew up. Everyone I knew wanted to be in a band to escape the world we found ourselves in.

Roddy couldn’t get his original screenplay made, so Dick Clement and Ian La Frenais restructured it, fleshing out the humour. The script changed again when we were casting the film, as we heard the lines mangled a thousand times in auditions and improved them.

When I arrived in Dublin, we immediately auditioned 65 bands and spent the next few months on a lengthy pub crawl as we trawled upstairs performance spaces to make sure we’d seen everybody – not an onerous task.

Robert Arkins auditioned for the roles of manager Jimmy Rabbitte and singer Deco Cuffe. But when Andrew Strong came in quite late, he nailed the Deco part. He had extraordinary confidence for a 16-year-old. So I cast Robert as Jimmy, which is the more difficult part from an acting perspective, as he’s the glue that holds the whole film together.

We had an unusually long five-week rehearsal period, with dramatic rehearsals in the mornings and musical ones in the afternoons. Because we were so well prepared, the shoot ran smoothly.

When you’re filming music, it lifts everyone. The cast were tantrum-free, and every day was a joy. But because most of the actors were working musicians – or more often out-of-work musicians – they lived rather nomadic, dubious lifestyles. None of them had phones; some relied on a granny taking messages. We gave them all mobiles – a novelty in 1990 – so we could keep tabs on them.

The dramatic scenes were filmed conventionally in a disciplined manner, but the musical sequences were shot in a grittier, looser, documentary style. We used a new technique of shooting music, which allowed me to play backing tracks loudly but shoot live vocals. Consequently, we did not have to rely on vocal miming – the norm for music filming.

We used multiple cameras to take advantage of the spontaneity of the moment; when I let the cast fly, they improvised like crazy, breaking the record for the most swearwords used in a film. It got an R-rating in the US – maybe why it only made $15m on first release.

But the Dublin screening was the best we had anywhere in the world. I never met an Irish person who didn’t like it. – Guardian