Make Up: A surreal nightmare vision of Cornwall caravan gothic 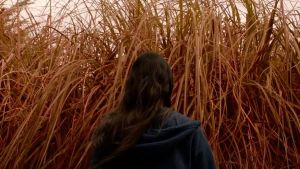 If one wanted to be perverse – and why not? – then one could find something of Daphne du Maurier in this excellent feature debut from Claire Oakley. After all, Make Up does concern a young woman processing mysterious, possibly ghostly occurrences while on a visit to maritime sections of Cornwall. The late shots of brooding ocean could be out-takes from a contemporary adaptation of My Sister Rachel.

Let’s not push it. Oakley’s grim exercise in caravan gothic, though very much its own beast, has more to do with the worrying spaces navigated by contemporary directors such as Lynne Ramsay and Pawel Pawlikowski. It begins as a tale of everyday jealousy and, through hints and evasions, leads us into a surreal nightmare in anxious shades of vermilion.

The opening sections find Ruth (Molly Windsor) reacquainting herself with her gruff boyfriend Tom (Joseph Quinn) who is doing odd jobs at a caravan park in du Maurier’s favourite county. The locale is grim enough in itself – a wandering neighbour with a dog throws a random misogynistic obscenity at the protagonist – without her worries about Tom’s fidelity, especially when she finds a smudge of lipstick on a mirror and a bright red hair among his clothing.

As Ruth wanders about the surrounding properties, she sees (or think she sees) a mysterious figure lurking in corners. When she makes uneasy friendship with Jade (Stefanie Martini) we suspect the relationship may pull her deeper into despair or offer her a route out.

Shot in impressive widescreen, mixing attractive compositions in with the grubby shots of tinkling arcade machines, Make Up stumbles slightly in its transition from angular realism to something more expressionistic. One part of the brain yearns to see the less unhinged, more focused film that the we seem to be promised in the first half-hour. But the closing acts, offering Ruth some kind of emotional connection, really do take on hypnotic majesty. All performances are rooted. Sacha Szwarc’s taut editing allows near-subliminal flickers of imagined horrors.

It is a dull commonplace to describe a debut as promising, but Oakley’s film really does point towards a grand future. She can have the du Maurier comparison for free.