Scoob! Scooby-Doo adaptation has hideous animation and a useless plot 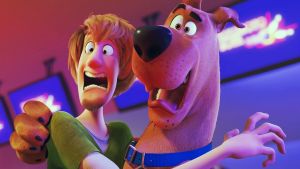 After a brief and too-sappy origins story in which a lonely boy named Shaggy encounters a stray, kebab-stealing Great Dane, the latest film adaptation of Scooby-Doo pays homage to the classic opening sequence of the late 1960s and early 1970s TV show, Scooby-Doo, Where Are You!.

At this moment, the full extent of the hideousness of the animation – courtesy of UglyDolls imprint Reel FX Creative Studios – is impressed upon the unlucky viewer. Scooby-Doo has enjoyed many reincarnations over the years. He has shared the screen with Vincent Price (in The 13 Ghosts of Scooby-Doo) and been saddled with his appalling nephew Scrappy. But he’s never been such an ugly mutt.

Frustratingly, there are some good jokes and ideas buried in the aesthetically displeasing Scoob!. Using the Hanna-Barbera sandbox, there are memorable and welcome appearances from Jason Isaacs’s Dick Dastardly, Tracy Morgan’s Captain Caveman and Billy West’s Muttley.

There is a pleasing knowingness in the material that never tips into snark. A bowling alley attendant notes Shaggy’s repeated use of the word “like” and suggests that it’s “almost as if they were a middle-aged man’s idea of how a teenager talks”. “Who names their kid Velma?” is another valid inquiry.

The story, however, is useless and overcrowded. Mark Wahlberg has fun as a cowardly superhero assisted by a capable black Teen Angel (Kiersey Clemons) and a sarcastic robot dog (Ken Jeong). But it’s a subplot too many for a film already groaning with cartoon cameos, a rampaging Cerberus, an Indiana Jonesy search for artefacts, and Simon Cowell.

Unfortunately the gang of screenwriters – no fewer than six are credited – have decided to expand Scooby’s traditionally limited, rhotacistic vocabulary. Hearing the quivering canine declare that he has “grown” left this viewer to cry out, “Scooby-Doo, where are you?”

Grow? Scooby-Doo isn’t supposed to grow. He’s supposed to cower and get the munchies. And that title!

The Bull Wall: The history of a Dublin landmark
6

Caroline O’Donoghue: ‘There is a real anger in Irish millennials’
9