In 'A Dog's Purpose' directed by Lasse Hallström a dog is reincarnated four times on his journey to finding the meaning of life, in a heart-warming comedy starring Dennis Quaid. 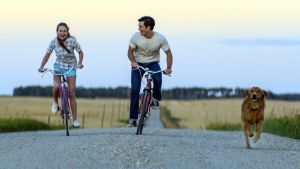 Lasse Hallström has directed quite a few dull-as-ditchwater literary adaptations (The Cider House Rules, The Shipping News) and more than one deadening dud (Chocolat, Salmon Fishing in Yemen). But the same filmmaker can always be relied on with canine-themed material.  Following on from My Life as A Dog (1985) and Hachi: A Dog’s Tale (2009), A Dog’s Purpose delivers animal ethics in a bouncy, wet-nosed, waggly-tailed package.

It’s a shaggy beast of a conceit: a dog, voiced by loveable Josh Gad, ponders the nature of his (or sometimes her) existence through successive reincarnations.

These lives are shaped and determined by human companions and the kindness (and unkindness) of strangers. As a beagle, born during the 1960s, the animal has not yet made it out of puppyhood when the dog catcher comes to call.

He has more luck as a red retriever, named Bailey, who grows up alongside Ethan (Bryce Gheisar, and later KJ Apa), his boy: “I’m definitely keeping this boy,” Bailey announces excitedly.

Together, the pair enjoy mischievous scrapes and weather occasional misfortunes until Ethan leaves for college. Later incarnations include a happy, pizza-loving Corgi, a dutiful German Shepherd K-9 officer, and a neglected yard dog on a chain.

A Dog’s Purpose made headlines for all the wrong reasons back in January, when, footage purporting to show on-set animal abuse was leaked to the website TMZ. Happily, a subsequent independent investigative report found that the video was edited to mischaracterise what happened to the dog, and, to use a much-read credit, that ‘No Animals Were Harmed in the Making of this Film.’

This means that the viewer can guiltlessly enjoy watching their plucky canine narrator die. And then die again. And again. We’re not bawling; you’re bawling.

The script, as adapted from A Dog’s Purpose: A Novel for Humans, is light and comic, even during darker episodes. DOP Terry Stacey’s sunny cinematography and Rachel Portman’s heart-tugging score enliven this commendable, cautionary dog’s-eye tale, as do the doggo performers. The humans are okay, too. A welcome, woofy warning against human speciesism.