A Christmas Star review: a charming Irish Yuletide movie made by kids for kids

A few twinkling stars – including Kylie, Pierce Brosnan and Liam Neeson – ramp up the seasonal spirit of this above-average yarn 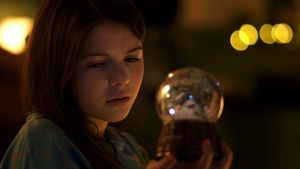 Noelle (Newtownards native Erin Galway-Kendrick) was born at Christmas and seems to possess a super seasonally themed superpower: she can infect any room or any football pitch with festive cheer and magnanimity.

Only her best friend Spud-Bob (Dungannon’s James Stockdale) knows Noelle’s secret. Lately, however, since the arrival of menacing industrialist Pat McKerrod (Downton Abbey’s James-Collier) and his mini-me son, Noelle’s powers are starting to fade. But without them, how can she hope to stop his nefarious plans to bulldoze their beloved home town in order to make way for a Christmas village?

A Christmas Star – the first ever Irish Christmas movie – was made by Cinemagic International Film and Television Festival for Young People. It’s a film made for kids by kids. We know what you’re thinking: ‘I’m lowering my expectations’ or possibly ‘gulp’. But, against all odds, the film, though not short on Yuletide schmaltz, is pretty good, and a huge improvement on such ‘family fare’ as the dread Nativity franchise.

Then again, Star has a few secret weapons. There are plenty of goodwill cameos from famous folks, including Kylie, Pierce Brosnan and Downton Abbey’s Julian Fellows. Liam Neeson provides the delightfully sour narration, a lovely counterweight to the film’s seasonal miracles. The jokes aren’t half bad. The youth cast are excellent: commendably, they make for a far more diverse group than we’re accustomed to seeing at the cinema.