Not at Electric Picnic? You missed Kendrick Lamar’s incredible gig 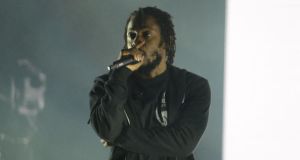 Kendrick Lamar: naturally shy, he doesn’t bask in attention so much as soak it up and internalise it – a black hole around which the huge, clattering grooves bend and warp. Photograph: Dave Meehan

Main Stage
Kendrick Lamar is widely acknowledged as the greatest rapper alive, but he has also transcended genre and stands as a singular artist in his own right. It is in this guise – a virtuoso with a unique ability to speak to our troubled times – that the 31-year-old son of Compton, in Los Angeles, takes to the main stage at Electric Picnic. His headline performance comes the day Eminem, like Lamar a protege of Dr Dre, has sought to reclaim his hip-hop crown with a surprise album drop. But, with a simultaneously muscular and hyperliterate set, Lamar demonstrates why, as speaker of truth in the age of Trump, he stands a class above.

“Is the rain gonna stop our party tonight?” he inquires rhetorically as the skies open. A storm is also brewing on stage. Along with everything else, Lamar is one of the outstanding minimalists of the era. Against crashing waves of brooding beats he opens with the bare-knuckle double assault of DNA and Element, street-level dirges that take aim at the high and mighty.

Naturally shy, Lamar is a different sort of superstar. He doesn’t bask in attention so much as soak it up and internalise it – a black hole around which the huge, clattering grooves bend and warp. But there are flourishes of spectacle, too. Spumes of flame dart skywards on Collard Greens, and he bops like a pop star on King Kunta, his throwdown to anyone daring his supremacy as a rhymer.

A deep dive into the vulnerable artist behind the Kung Fu Kenny persona is provided by Swimming Pools (Drank). Chronicling his community’s struggles with alcoholism, it is searing and heartfelt – a deconstruction of lame gangsta stereotypes. Memorable in a different way is All the Stars, a standout from the Black Panther soundtrack, which Lamar curated and which he here closes with.

Electric Picnic is a different sort of challenge for Lamar, a big festival rather than an arena heaving with fans. Yet he conquers and looks humble doing so. It is smart, it is cathartic, it is hip hop, it is everything. Ed Power

CHVRCHES: THERE’S NO ROOF, BUT THEY BLOW IT OFF ANYWAY

Main Stage
The wide open spaces of Electric Picnic’s main stage pose a challenge for Chvrches, whose head-hanging electropop feels designed for hugging the shadows. But the Glasgow three-piece own their big moment at a festival where they have previously woven their introspective magic in the smaller tented arenas. Led by the slight yet mighty-lunged Lauren Mayberry, they bulldoze through the cathartic Recover and uncork sinkholes of angst on The Mother We Share. There is room for humour, too. “Is that a flag with Jonah Hill’s head?” asks Mayberry, stumped as to why festivalgoers are flourishing a banner emblazoned with the likeness of the Hollywood actor. As with all the best bands, they also present a case study in contrasts. Before finding success as mopey pop stars, Iain Cook and Martin Doherty passed through endless Glasgow indie no-hopers. They still look as if they should be roadies for Primal Scream – which cannot be said of Mayberry, who is sporting glittering face paint and a twinkling dress. As darkness descends they finish with Never Say Die, a song both uplifting and ominous and thus an entirely appropriate farewell. There is no roof, but Chvrches blow it off anyway. Ed Power

Main Stage
It has been a while since Ash played a major stage at a major festival, yet here they are, a band whose demeanour is like that of a smiling cat with a few lives left. That they have gone in and out of favour over the past decade is perhaps more a matter of changing tastes in music than any lapse in quality control. Rarely have a band been as focused and results-driven, and although the music sticks closely to the classic blueprint of sweet-toothed Phil Spector-produced songs played with all the vigour of a pair of teenagers about to pop their respective cherries, there is innate charm to it. Now an improbable 20-plus years into their career (which began when they were school friends in Northern Ireland), they still play music that packs a fine punch. Older hits, such as Oh Yeah (much more summer-friendly than briskly-breezy-early-autumn-evening-friendly), Shining Light and Girl from Mars fuse easily enough with newer tunes, such as Buzzkill, Annabel and All That I Have Left. The result is a crowd-friendly, proper punk-pop gig that proves teenage dreams – and kicks – can come true, and endure. Tony Clayton-Lea

Body & Soul
With a grin and a lip curl, Paddy Hanna brings indie wistfulness to Electric Picnic’s most reliably phantasmagorical stage. Watched by a modest yet appreciative early-evening crowd, and with multicoloured flags all around, the Dublin troubadour proceeded at leisure through material from his recent Frankly, I Mutate album. Carefree alt.pop is in perpetual danger of collapsing under its own tweeness. But Hanna, veteran of Grand Pocket Orchestra and No Monster Club, keeps self-satisfaction at bay with songs that step between lilting and slyly ominous. You don’t know if he’s laughing or verging on a breakdown. It helps that he has an adaptable voice, darkly ruminative on Underprotected – where he showcases his talents as rockabilly crooner – and folksy on All I Can Say Is I Love You. And he has a showman’s gift, demonstrated by his brave pairing of a violent-blue bandanna with sunglasses. (As a coup de grace he jokingly flips off a fan taking snaps up front.) The standard gripe against indie rock is that it’s too self-absorbed to make a connection. Yet Hanna reaches out and finds, on the first night of Electric Picnic, an audience ready to take him by the hand. Ed Power

THE MURDER CAPITAL: JAGGED MUSIC AIMED AT THE JUGULAR

Other Voices
One of two things can happen to a band that leaps too quickly from the traps: success or failure. A case in point is The Murder Capital. Introduced by one of Other Voices’ talking heads, Huw Stephens, as “a weird and strange band documenting weird and strange times”, the Dublin five-piece make little apology from their first song onwards. With a shudder of noise that fans of Joy Division will be all too familiar with, they continue with uncompromising slabs of rhythm that chuck the word “intense” into the ha’penny place. The stage can barely contain them, as they get so under the skin of the music that they are in danger of being enveloped. With their jagged music aimed at the jugular, you could accuse The Murder Capital of trying too hard were it not for the commitment oozing from every pore, riff, piece of pinpoint guitar work, drum roll and voice. Midway through, however, the roughneck approach alters, with a slow Krautrock rumble of a song that shows a different, important side to the band and their music. Ones to watch, ones to hear. Leave the kids at home for this murderous bunch. Tony Clayton-Lea

Don’t dip your pen in someone else’s blood: writers and ‘the other’
5

‘Conor McGregor is an inspiration. There’s a severe vulnerability to him’
10