Dear England: Here’s who the DUP are

You’ll be seeing a lot more of that little-known species, the lesser-spotted Ulster unionist 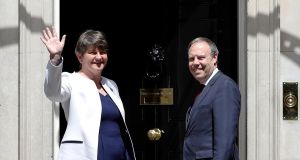 The DUP’s Arlene Foster and Nigel Dodds arrive at 10 Downing Street. Not quite the same as Prince fans arriving at Paisley Park. Photograph: Phil Noble/Reuters

Oh, the ingratitude of some people. Following the recent UK election, one of the most searched-for questions was: “What is the DUP?”

At least Kay Burley of Sky News had her facts straight. “What first attracted you to the anti-abortion, pro-Brexit, climate change deniers that are the DUP?” she asked Graham Brady MP, chairman of the 1922 Committee.

It’s taken only 46 years and some of the busiest political disputes in European history for the British people to notice that the Democratic Unionist Party exists.

It’s not as if they are a shy bunch. Given the slightest encouragement – indeed the slightest discouragement – DUP members will stomp down your street hammering drums the size of landing craft. Their founder, the Rev Ian Paisley, would never whisper when he could bellow.

Hats off to headwear

No other mainstream party in the UK makes such an issue of their loyalty to the Crown. (Interestingly, republicans and unionists share an anachronistic taste for addressing Britishness in terms of the monarch’s headwear. Who else still refers to the British army as “Crown forces?”)

They’re here. They’re not remotely queer. And they’d like to say hello.

Yet the unionist community has got little recognition from fellow patriots on the other side of the Irish Sea. The people of Middlesborough call that thing down which cars drive “the road”. Unionists know they have the right – the RIGHT, I SAY! – to progress down “the Queen’s highway”.

Yet for all that loyalty, the “mainland” stubbornly recognises them not. The average British person knows little and cares less about Northern Ireland. The intricacies of its internal administration are as obscure as those of Saint Helena, Ascension and Tristan da Cunha.

The news that, following the Tories’ failure to gain an overall majority, the DUP would be entering into an arrangement with the minority government has been met with the same bafflement that might greet the arrival of cargo cultists to Downing Street.

It would be easy to fall into the trap of seeing this as a great unrequited love affair. In this reading, Ulster unionists are like the fans of a gorgeous pop star who is never likely to play in their small town.

They plaster pictures of Dirk Britannia on their bedroom wall and kiss his swollen lips before curling up with a stuffed version of their idol. They get enormously and irrationally jealous when rumours emerge of his impending marriage (to Allesandra Europa, for example). Letters are written. Tweets are sent. But, when they turn up to the stage door, the Dirkistas find that they’re not on the guest list.

This version plays a little like the plot of Stephen King’s Misery. Lord help Dirk Britannia if he ever runs off the road near the DUP’s stony grey mansion. He’ll be walking funny for the rest of his life.

The analogy doesn’t really work. It springs from an ancient, misguided assumption. Those hostile to the unionist ideal will often wonder: “If they love England so much why don’t they go and live there.”

The attachment to the United Kingdom is wrongly framed as an affection for England. This overlooks the obvious fact that the UK is a family of nations that – despite their differing sizes and influence – pretend to equality. You may as well ask an American to go to Washington, DC if he loves America so much.

More specifically, the assumption ignores the complex and fretful relationship between Northern Ireland and England. A less temperate man than me would argue that the average unionist trusts few English people other than the queen.

There are endless cultural foibles that – despite the narcissism of small differences – unite Northern Irish unionists and nationalists. One is a desire to see just about anybody beat England at rugby.

Nothing gives a northerner greater pleasure than the fury generated when an English shop assistant refuses a Northern Irish banknote. Typical of them. What more would you expect? That would be far less likely to happen in Scotland.

And that’s where the cultures really connect. Oor Wullie is admired in mid Ulster. Tunnock’s Tea Cakes are enjoyed in all six counties.

No great love is lost between England and the awkward top right corner of Ireland. The DUP’s loyalty to (ahem) the Crown fails to inspire any great Anglophilia.