How is the new Taoiseach younger than me? 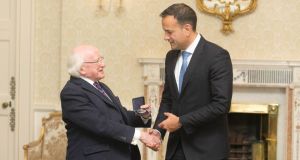 Youngest Taoiseach: our leaders are meant to look like grizzled ancients in Jack B Yeats paintings. Photograph: Gareth Chaney/Collins

What the hell just happened? I doze off in front of Antiques Roadshow for half an hour and wake to find decades have passed. Nothing ages a fellow so much as discovering he is now older than the head of state.

Happily, I am yet to be older than a sitting US president. I was older than the UK prime minister when wee Davy Cameron was in Downing Street, but the accession of Mrs May restored sanity (in this one area, anyway).

If the heart kept ticking it was inevitable that a Taoiseach would eventually arrive as my junior. I grimly imagined some near contemporary – remembered stuffing ballot boxes at the university, perhaps – taking the ermine and ushering in my generation’s slide towards oblivion.

“Wasn’t he younger brother to that guy who nearly died drinking developing fluid?” I imagined myself saying. “A bright little spark. I always expected he’d claw his way to the top.”

Nothing prepared us for this. Oh, our policemen get younger and younger. That priest doesn’t look old enough to drive. Never mind that. The first Taoiseach to take office when younger than me is technically of an age to be my son.

As a medical man Dr Varadkar will know that the timings only just work out. As a conservative chap he will be discouraging teenagers from siring future taoisigh when they should be concentrating on their Junior Certificate. But it is possible.

The Taoiseach is supposed to look like a grizzled ancient in the background of a Jack B Yeats painting. He’s not supposed to know who Talking Heads are. When operating a mobile phone (or any other piece of technology that doesn’t run on valves) he’s supposed to suggest a goose looking into a bottle.

Take a breath, old idiots. Get your head around this. Leo Varadkar would have been a little too young to appreciate Super Mario Bros when it arrived. His James Bond is Timothy Dalton. If he has a Dr Who then it’s probably Sylvester McCoy, but the series was in hiatus before he was old enough to care.

We like to think that, when the head of state came of age, he danced to the latest by Bobby Darin. The good news is that, when Leo had his 18th birthday, Reet Petite by Jackie Wilson was at number two. The bad news is that was the reissue triggered by a contemporaneous claymation video. The number-one record was Jack Your Body by Steve “Silk” Hurley. Jack Your Body? That’s practically contemporary. How are we expected to take this man seriously?

Then there’s this mess over in France. Obviously we’d rather have an infant than the latest sprig from a harvest of fascists, but the arrival of Emmanuel Macron heralds another jarring plunge through the generations.

Maybe those of us who remember the old money should just place ourselves on the ice floe and leave the future to the youths in lounge suits. This wasn’t supposed to happen yet. We expect furrowed aquiline faces like those of Gen de Gaulle and Georges Pompidou to front the heads of French presidents. We hadn’t quite finished with the baby boomers. It’s too soon for Generation X.

The current, unpleasant situation differs from that which distressed earlier neurotic greybeards. In the postwar years presidents and prime ministers tended to begin their terms close to pension age.

Dwight D Eisenhower was 62 when he took office. Richard Nixon was 61. Harold Macmillan was 62 when he became UK prime minister. Jim Callaghan was 64. Margaret Thatcher was a relatively youthful 53 when she grabbed the reins of power.

Older people feel less need to slip into cultural irrelevance as bones seize up. The bouncing Sir Mick Jagger is now older than the tweedy Harold Macmillan was when he left office

There is a conundrum here. Over the past few decades older people have felt less need to slip into cultural irrelevance as hair recedes and bones seize up. The bouncing Sir Mick Jagger is now older than the tweedy Macmillan was when he left office.

Yet, since the accession of Tony Blair (then 43) and Bill Clinton (46), in the 1990s, premieres really have started to get younger and younger. The cult for youth that Jagger helped launch in the 1960s eventually spurned a cult for early middle age in politics.

The shift is not imagined. I find that, at 53, I am exactly the average age for accession to the office of UK prime minister. Generations have fallen away.

Oh well. Mrs May is closing in on 60. Her most likely successor will be a rival from her own party. David Davis will do nicely at 69. Amber Rudd is a few months older than me. Good stuff. But the favourite, Boris Johnson, is a few months younger.

We have another reason to wish him ill.

The Streets: None of Us Are Getting Out of This Life Alive review – Unoriginal material
10