Dublin Pride 2017: The events not to miss this weekend

The theme is ‘find your inner hero’. Expect a lot of Batmen, Robins and Wonderwomen 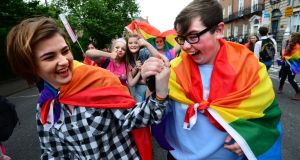 The Dublin Pride parade begins at 2pm this Saturday, but there are plenty of other festival events to keep you occupied. The theme this year is “finding your inner hero” and people are encouraged to dress up in their favourite superhero costume. The festival has been running since Friday June 16th and closes after the parade.

Pride warm-up with Veda: George performer, Veda Lady, pays a visit to Street 66, Parliament Street, Dublin 2, on Friday to host a pride warm up show. Along with Pixie Woo, they’ll be performing some 1980s classics from 9pm. Admission is free.

Teni Pride Breakfast: The Transgender Equality Network is hosting a breakfast from 10am the morning before the parade, in the Church cafe, Mary Street, Dublin 1. Following breakfast, Teni will head to the start of the parade route.

The main event: The pre-parade rally kicks off from noon in St. Stephen’s Green, Dublin 2, with performances from drag queens. Speakers include David Norris and BelongTo executive director, Moninne Griffith, who also serves as the parade’s Grand Marshal. The new Taoiseach Leo Varadkar, is also planning to march in the main event with Fine Gael LGBT. Starting at 2pm, the parade sees a new route this year, setting off from St Stephen’s Green down Kevin Street towards Smithfield in Dublin 7.

Party in the Square: The official afterparty will be held in Smithfield square from 1pm to 7pm. It’s hosted by Panti Bliss, and performers include Niamh Kavanagh and Brian Kennedy. The party includes food stalls, a family playground and the Pride shop.

Saturday night: The night out following the parade is probably more important than the parade itself, and there’s no shortage of choice. The official Pride afterparty is in Smithfield Square, while Pantibar is hosting a street party from 2pm. If you fancy staying indoors, the George is holding its annual Pride afterparty, or Mother is taking over the Tivoli from 4pm.

Hangover Acoustic Sessions: Hair of the dog is supposedly one of the best cures for a hangover, so if you’re feeling a little worse for wear after the night before, Street 66 on Parliament Street are hosting some acoustic sessions from 5pm. Featuring live sets from local musicians, admission is free or if you’re still going strong, Shirley Temple Bar’s Pride Bingo takes its usual slot in the George from 9pm.

Head-shaving, rape, murder. Atrocities against women in the ‘Tan War’
5

God, make way for Gaia: A deity even atheists can believe in
9