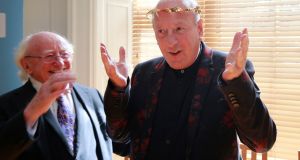 President Michael D Higgins with Roger Doyle at a ceremony marking the composers elevation to Saoi by Aosdána, which is in recognition of outstanding achievement in the arts. . Photograph Nick Bradshaw

The composer Roger Doyle was made a Saoi (wise one) of Aosdána at a ceremony on Friday addressed by President Michael D Higgins.

Only seven members of the 250-member artists’ association, Aosdána, can be a Saoi at any one time. Mr Doyle is only the 20th artist to have had the honour bestowed on him since the association was founded in 1981.

Previous holders of the title include Samuel Beckett, Brian Friel and Seamus Heaney.

Mr Doyle is only the second composer to have been elected a Saoi, after Saoirse Bodley.

Members of Aosdána receive an annual grant and in his speech to a gathering in the offices of the Arts Council in Dublin, Mr Doyle said he has been composing non-stop since he became a member at a relatively early stage in his career.

The 70-year-old said he was composing more than ever these days and was finding it easier to do so. He said this might have to do with knowing there was only so much time left, but he thought it might be more due to his being willing to put more trust in the “intuitive” side of composing.

He said he works every day and that the right side of his brain says “leave this to me. That’s what it feels like. And when I do it, magic happens.” Often the left side of his brain responds by asking “how did you come up with that?”

To laughter from those present, Mr Doyle said composing makes him happy and that he often lets out a yell. “I roar in the studio, with delight.”

Referring to his epic work Babel, which was issued in 2013, Mr Doyle said he spent 10 years working on it and could not have done so without the support of Aosdána.

President Higgins, in his address, quoted from a review of Babel that said it allowed the listener into the “the weird and wonderful contents of Roger Doyle’s head”.

He said Mr Doyle had produced an “exceptional body of work” that had made a deep and lasting contribution. It was important on these occasions to recognise not just the achievement of the artist but also the life commitment that was involved. “It is beyond immediacy.”

The election of Mr Doyle by his fellow members of Aosdána means there are currently six Saoi. The others are the composer Saoirse Bodley, visual artists Camille Souter and Imogen Stuart, film-maker George Morrison, and the writer Edna O’Brien.