Theatre, dance and literature events can all be enjoyed online 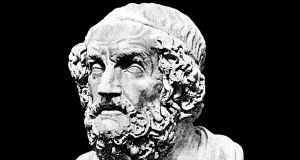 At ClassicsNow festival, audiences are invited to explore the arts and ideas of ancient Greece and Rome.

Ranging from Irish theatre and dance to language, literature and myth, the first ClassicsNow programme begins on Friday, November 13th. In a new weekend festival, audiences are invited to explore artistic interpretation and reimagining of the literature, arts and ideas of ancient Greece and Rome amid the current explosion of interest in the ways in which classical cultures speak to us today.

In recent years we have seen new versions, translations and reworkings of Homer’s Iliad and Odyssey, Greek tragedy and Roman history. Forward Prize-winner Fiona Benson reworked Ovid’s Metamorphoses in her recent collection exploring the theme of sexual violence and consent. Novelists Kamila Shamsie, Madeline Miller and Pat Barker are reshaping Greek myth, as is musician-poet-playwright Kae Tempest for theatre. In recent years Irish novelists, poets and playwrights have drawn on Greek tragedy and myths, including Antigone, Medea and the Trojan War, to explore enduring themes, personal and political, through a contemporary lens.

Public interest in the ancient world has been bolstered by best-selling novels based on Roman history by Robert Harris, later staged by the Royal Shakespeare Company, and by massively popular television series presented by British classical historians such as Bettany Hughes, Michael Scott and, above all, Mary Beard.

The fact that one of the most prominent public intellectuals on our screens is a classicist has undoubtedly played a part in stimulating interest in the study of antiquity. Beard succeeds in being approachable while maintaining rigorous scepticism towards received opinion or misguided projections on to the civilisations of the past. She advocates for an understanding of classics as being in dialogue with the intellectual and artistic exploration that has gone before, mediated through centuries of reading, writing, scholarship, art and creativity, building layer upon layer.

Considering the current interest in retelling Greek myths, Natalie Haynes, author of A Thousand Ships, thinks that the myths function as a mirror for our own preoccupations. She explores this in the preface to her new book on women in Greek myth, Pandora’s Jar, which she will discuss in an online in-conversation event on Saturday night.

Retelling myths offers an opportunity to bring out things that had been obscured, or to bring different narrative perspectives to bear. And because there is no single, original version of the myths, but multiple variants, they lend themselves endlessly to new adaptation and interpretation. Translators also bring their own emphasis to the ancient texts.

In the introduction to her acclaimed translation of Homer’s Odyssey (2017), classical scholar Emily Wilson highlights the resonance of the Odyssey’s theme of hospitality (xenia) with our pressing questions about migration, displacement of peoples after war, the treatment and welcome of refugees and strangers and the meaning of belonging and of home. “This poem of homecoming does not mean geographical homecoming only; it means reconstructing relationships and identity.”

These themes are highlighted in a powerful new film from Canadian director Sophie Deraspe, who sets the story of Antigone in a contemporary Montreal where Antigone’s family are refugees from Algeria. Antigone will be screened online this weekend on the Irish Film Institute’s video-on-demand platform, IFI@Home, in association with ClassicsNow. (An admission charge applies.)

The subject of migration and refugees is placed in our current context of the Covid-19 pandemic in another new version of Antigone by playwright and journalist Colin Murphy. In his play’s scenario, Ireland in lockdown is attempting to keep itself free of a deadly “eurovirus” by closing its borders with the introduction of something akin to martial law. Murphy will discuss his ideas for this work-in-progress with director and author of his own version of Antigone, Conall Morrison, and arts journalist Paula Shields online on Sunday.

Funded by the Arts Council as a new festival, ClassicsNow has a steering committee with representatives from the classics departments of University College Dublin, Maynooth University, Trinity College Dublin and the Classical Association of Ireland (teachers): Alexander Thein, Maeve O’Brien, Martine Cuypers and Seamus O’Sullivan, respectively.

The ClassicsNow weekend is the start of something new. A platform for future collaborative projects, performances and interdisciplinary public events. It has the potential to extend in many directions: plugging into cultural debates about historical narrative and race, decolonising museums, cultural appropriation, or the preservation of texts in the digital age . . . offering multiple ways of considering the future of the past.

Helen Meany is the curator of ClassicsNow which runs from Friday, November 13th to Sunday 15th. All events will be streamed online at classicsnow.ie and can be watched again. Free registration is required for the opening in-conversation event with Daniel Mendelsohn and Sebastian Barry at 7pm on Friday.

Award-winning memoirist, classicist and critic Daniel Mendelsohn, editor-at-large at the New York Review of Books, will be in conversation with Sebastian Barry, Laureate for Irish Fiction. Mendelsohn’s books include An Odyssey: A Father, a Son and an Epic and The Bad Boy of Athens: Classics from the Greeks to Game of Thrones. His latest, Three Rings, connects three exiled writers from different periods (François Fénelon, Erich Auerbach and WG Sebald) through a series of encircling narratives in homage to Homer’s Odyssey. – Friday, November 13th, live streamed at 7pm.

Italian journalist and classicist Andrea Marcolongo will talk about her inspiring and best-selling book The Ingenious Language: Nine Epic Reasons to Love Greek. This online conversation is with New Yorker writer Mary Norris, author of Greek to Me: Adventures of the Comma Queen, a celebration of Greek language and culture. – Saturday November 14th, 2.15pm.

Junk Ensemble dance company takes a myth from the Roman poet Ovid’s Metamorphoses as the starting point for a dance piece, The Misunderstanding of Myrrha, commissioned by Dublin Dance Festival. In a film about the creation of this new work, choreographers Jessica and Megan Kennedy are joined by artist Alice Maher and composer Denis Clohessy. – Saturday, November 14th, 4pm.