About Endlessness: A droll form of despair

Review: Roy Andersson’s new film is just his sixth since his explosive debut in 1970 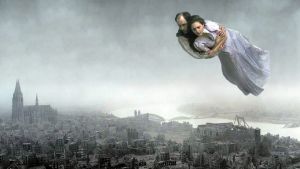 About Endlessness: A couple float over a meticulous miniature set of bombed-out Cologne

A father tying his daughter’s shoes in the rain becomes a near Sisyphean labour. A priest consults a psychiatrist about his loss of faith. Two high schoolers read the first law of thermodynamics from a physics textbook and, noting that energy cannot be created or destroyed but can only be converted into new forms, the two debate whether they will meet again as potatoes or tomatoes.

Stories abound about the historical frictions between the Marxist Andersson and his former right-wing mentor, Ingmar Bergman. Was Andersson’s retreat into the commercials sector entirely down to The Seventh Seal director? Or were mental health issues at play?

These and other questions are broached in Fred Scott’s revealing new film Being a Human Person, a making-of documentary that brings an even greater poignancy to About Endlessness. (Both films are now available as part of Curzon Home Cinema’s Andersson season.)

He may not be cinema’s most prolific presence, but the Swedish auteur remains one of the most influential directors alive, especially among such younger Scandi talents such as Ruben Östlund.

If you are already familiar with Andersson’s unique oeuvre then his sixth (and reportedly final) feature is entirely on-brand. Since Songs From the Second Floor (2000), the filmmaker has utilised the same format.

Each short film is crafted over a period of three to four months at the director’s Studio 24. It requires six or seven years for a feature to emerge at the end of such a painstaking process.

Every frame is a remarkable feat of trompe-l’œil: the sometimes expansive grey skylines and deep focus sets have all been created on a set in a Stockholm townhouse. (Watch out for the magic About Endlessness director of photography Gergely Palos works at a recreated railway station.)   That artifice is counterpointed by Andersson’s aching sense of humanity. Nobody sees and stages foibles and follies better than Andersson. And nobody derives more amusement – or rather bemusement – from banality. “It’s September already,” a woman says to her husband. “Hmm”, comes the equally empty response.

A female narrator distinguishes About Endlessness from the Living trilogy – comprising Songs From the Second Floor, You, the Living (2007), and A Pigeon Sat on a Branch Reflecting on Existence (2013) – that preceded it. “I saw a man with his mind elsewhere,” she says, as a waiter continues to pour wine after he has run out of glass.

Whereas Pigeon bobbed and weaved around a pair of failed novelty-item salesmen, the chapters that make up About Endlessness are entirely discrete, save for a unifying droll form of despair.

As ever, the second World War continues to be felt in Andersson’s work. Here, a couple float over a meticulous miniature set of bombed-out Cologne. A dejected Adolf Hitler retreats to his bunker as his troops march in an orderly fashion toward a prisoner of war camp.

Jesus staggers up an urban thoroughfare, carrying a cross, while people flog him. “What have I done to them?” he wonders, with visual echoes of both Monty Python and of the equally anachronistic vignette of A Pigeon Sat on a Branch Reflecting on Existence in which King Charles XII and his 18th-century regiment enter a contemporary café.

It’s life, both not as we know it, and yet precisely as we experience it.